Emperor Shera is a 6-star unit that plays the Physical Attacker and Support roles. He’s a really good attacker with a great health pool and skill layout.

Shera’s main element is Fire giving him good coverage there. Most of his active damaging attacks are Fire based so he’s good against enemies that have poor resistance to it.

One of Shera’s best methods as a Support is his ability to boost ATK. With Reinforcer and Unhesitating Will, he can boost his ATK by quite a bit.

When his ATK is boosted his damage output is amazing. The two moves that boost his ATK last 3 turns each so you can use them one after another.

Then while his ATK is boosted you can use moves like Ende Streiten and Eroberung to get some serious damage in. His damage output can be taken even further in his Traits.

Having three Killer abilities giving him increased damage to Demons, Dragons, and Plants. While also having Blade Adept and Blade Mastery boosting ATK when equipped with a Sword.

So overall, Emperor Shera’s damage output is very good when paired with all his boosts. His Fire coverage is a nice addition to the unit as well.

Verdict: A high damaging physical attacker. A good choice for those who lack heavy hitting PA

Emperor Shera is neutral to all elements and status ailments.

The new emperor of Zoldaad. As Emperor Sozhe’s legitimate son, the crown prince Shera took the reigns of the nation as the most influential person in the empire following his father’s death. His people have acknowledged his great efforts, and when he was officially crowned, the whole nation showed its unwavering support for its new emperor. Although he has proven himself to be a strong leader, he is only human, and often misses the company of his older brother Jake. 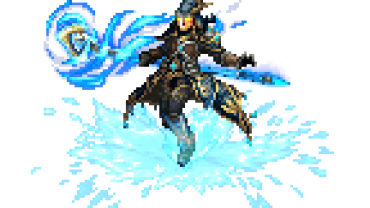