Fohlen is a 6 star unit that falls into the Physical Damage/Support role. He’s a dual role unit with very good stats and a great skill lay out.

The first thing to note about Fohlen is his skills building up his Wind Resistance. Extend and Speedster both giving him Wind resistance making him an ideal unit to use against Wind based enemies.

Speedster also giving bonus effects like chances to evade physical damage or counter when attacked. So with that one skill he is given 3 very good abilities each helpful in their own way.

So talking pure skill, Fohlen is a great unit that can put in a lot of work when it comes to dishing out damage or setting up situations for the rest of the party to follow suit.

He’s outfitted nicely with his active skills and his passives are just as helpful. Spear Mastery giving him bonus damage when using a spear and Best Partner giving 100% resistance to Confuse and Paralyze.

And his Limit Burst fits the theme of his damage and set up. it deals heavy physical damage while giving a DEF decrease to all enemies for 3 turns.

Fohlen is neutral to all elements and status ailments.

Fohlen can equip 3 weapons and 6 armors.

An eccentric knight who fights atop a chocobo. Fohlen wears flexible and adjustable armor that allows him to wander around the world working as a mercenary for hire. Chocobos are usually used as a means of transportation and as a tool for cultivating the land, whilst most military forces prefer airships to carry out their duties. For this reason, chocobo knights are often frowned upon, making their numbers scarce. 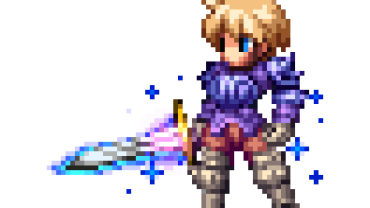