If you follow a mangaka long enough, you’ll generally start to see him/her show a lack of versatility.

I’m not going to tell you the Kouji Seo is completely immune from these things, but it seems he’s found a way to use them to play on your expectations in Fuuka. 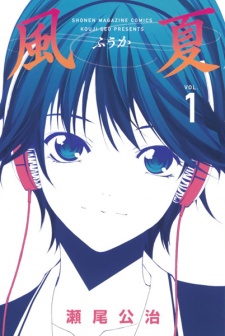 Fuuka starts out as the story of a kid addicted to Twitter. Seriously. That’s your premise.

Hear me out, now. There’s more.

Yuu Haruna is a high schooler just kind of floating through life, and he spends a bunch of time on Twitter, which means he’s always looking at his phone. Like anyone who has tried to text and walk at the same time, Yuu bumps into somebody.

That “somebody” is Fuuka Akitsuki, a free-spirited girl who assumes Yuu was using his phone to snap pictures of her (he wasn’t). Cooler heads don’t prevail. Before he has a chance to even say anything, Fuuka, on page 4 of the entire series, grabs Yuu’s phone, smashes it into the pavement, and smacks Yuu across the face.

Fans of Seo’s previous work will recognize Fuuka’s family name, Akitsuki. Turns out, this girl, the titular character, is the daughter of Yamato and Suzuka Akitsuki, the main characters from his previous work, Suzuka. So I guess this is technically a sequel – more on that in a minute.

As you might expect, after such a sudden and violent encounter, the two of them meet again at school the next day and hash things out. Despite the rocky start to their relationship, Yuu feels drawn to Fuuka, and thus obvious love story becomes obvious.

At first, Fuuka faces pressure to join the track-and-field club at school. It makes sense – much of Suzuka was based around track, as both of Fuuka’s parents became national-level athletes. Fuuka briefly entertains the notion, but eventually she finds her true calling – she wants to sing, and she’s quite good at it.

So it is at this point, about six chapters in, that you find out Fuuka is about both romance (because Seo’s manga are always about romance) and music. The main characters – who initially bonded over mutual love for the same band – are going to start a rock band. This is the first big misdirection Seo plants – knowing Fuuka’s pedigree, and that she’s the title character, the pieces are all in place for this to just become another Suzuka.

It’s always an interesting thing, seeing how music is represented in manga. In anime, you can just have music. In Fuuka, a good performance is usually conveyed through liberal use of shockwave effects coming from the stage, and the shocked – and then delighted – look on the faces of the audience members. It’s not as nice as hearing the actual music, but it’s a cooler effect than just showing a bar of music. It does the job.

So for the first 35 chapters or so, things progress smoothly. Yuu and Fuuka form their band, find members, grow closer together, even fall in love. We’re introduced to their biggest band of influence, the Hedgehogs, and Yuu’s childhood friend, who happens to be a highly successful idol.

With the band formed, and Fuuka looking like a once-in-a-generation talent at the front of it, they get their first real gig. Yuu and Fuuka have admitted their mutual feelings for each other, and things couldn’t be going better.

Now, we’re going to reveal the biggest spoiler of the series here, because I can’t discuss this series honestly without discussing the elephant in the room. If you’d rather find out yourself, just breeze on down past the big spoiler tag.

Okay, here we go. Fuuka gets hit by a truck and dies on the way to the gig. Seo actually killed off not just a main character, but the title character 36 chapters into the series.

This changes everything, as you might expect. And it sets up the core theme of what the series really is – Fuuka is about music, but it also becomes a manga about dealing with loss. Turns out, the first 35 chapters were basically just a prologue to make sure you have to deal with it as a reader, too.

Now, let’s back up a bit. It’s at the end of the first chapter that a metaphor is introduced. “Fuuka,” in Japanese, translates roughly to “warm wind.” There are repeated references to Fuuka being surrounded by wind, or people around her being carried along by wind, and so on. A gust of wind is frequently used to represent her making a big decision, or having an impact on someone else.

In the aftermath of Chapter 36, a gust of wind is used to depict her trying to push her friends forward from the afterlife. Everybody in the band – that’s Yuu and three friends – is at a loss as to what to do. They were enthusiastic about the band before, but now…

Cue the gust of wind at their backs – the metaphor for Fuuka giving her friends a push forward. Fuuka still makes metaphorical cameos in the series when somebody needs encouragement.

With this setup, it seems the story still is about Fuuka – about the people she brought together, the abilities she awoke in them. About the band she built trying to carry on her legacy and achieve her goals in her memory. About Yuu – who took up the vocals when Fuuka was “late” to the gig – growing his skills and becoming a true musician and band leader.

From this point on, the focal point of the series shifts and we focus on characters trying to grow personally, and the band trying to go professional. Yuu finds himself at the front of the band, and basically surrounded by girls with varying levels of interest in him, but as you might expect, he doesn’t give a single thought to any of that.

So basically, everything you thought the series was going to be about – it isn’t. Not even romance… yet.

Now that the series is focused strongly on music, we have our protagonists’ band signing with an indie record label, meeting other friend/rival musicians and bands (including another girl named Fuuka Aoi), and working to become better musicians, both collectively and as individuals.

That doesn’t mean Seo is going to leave readers high-and-dry, of course. This is a shounen manga, and a bit of fanservice has always been a part of his style, and so there are a fair number of trip-fall-accidental boob grope sequences, panty shots, and even a hot springs scene with an American pop/rock sensation (a made-up one, of course, not a real one).

Still, things never devolve to the point where the series is just about ecchi scenes. Far from it, in fact. You may go 10 chapters without seeing anything risque, it’s just a matter of where the story is – he’s not doing it just to do it.

Despite fan fallout from the major twist, Fuuka is rapidly becoming one of my favorite series running right now. Seo’s strongest point in his manga is writing characters that go through tremendous growth through a series of events.

Like Seo’s past series, Fuuka is authentic, mature, real, and emotionally raw.

The characters are likable and believable, although Yuu’s bandmates tend to fade into the background at times.

The plot is well-paced – events that seem placed far in the future (“only 6 months until this concert,” etc.”) don’t take forever to come around, and so plot arcs are introduced and wrapped up without dragging.

The art is always a highlight, as the veteran Seo’s polished style shifts from cute to cool to comedic at will in just about every chapter. This particular series sets off his wild side, as goes over the top designing some awesome-looking punk rockers.

There simply isn’t much to complain about so far in this series, which is up to chapter 106 at the time of writing. Any nitpicks I have are vastly overshadowed by the positives.

There isn’t anything I’m aware of that’s quite like Fuuka right now, and that’s a high compliment.

I’m enjoying it, and imagine anyone else will do the same. At least until the next gut-punch knocks all my tears out again like Sonic rings. But we’ll drown under that bridge of emotions when we come to it.