Glauca is a 6-star unit that plays the Physical Damage role. His stats are well rounded for his role having some pretty good HP and his skills fit his role nicely.

Now, most of Glauca’s abilities are all physical damaging which is nice because that’s his whole purpose. But what makes him really neat is his Automatic Repair ability.

It’s his first skill and heals himself with a pretty decent amount. Being able to be a heavy attacker but have his own healing is extremely helpful.

The trade-off of being able to dish out damage for a few turns than recover any damage done to him is a high selling point for this unit. As for the rest of his skills, they are all pretty much what you’d expect for his role.

All physical damage moves, most of which having some kind of secondary effect to them. His Traits are set up well to match his skills especially having Large Sword Mastery giving him an attack bonus with Greatswords.

He also has a conditional ability to use when Unhesitating Counter is triggered. So putting him in a situation where you can use that is never a bad idea.

Verdict: A good 6-star attacker made even better by the fact he can heal himself.

Glauca is neutral to all elements and status ailments.

Glauca can equip 2 weapons and 4 armors.

The general of the Niflheim military forces spoken of in stories from the faraway land of Eos. The Empire of Niflheim has made extraordinary advancements in technology that allowed it to create Magitek-based military forces to take over other territories. Glauca is the general of said military forces, a position no doubt earned through his abilities. He wears a suit of armor made of liquid metal that covers his entire body, including his face. Rumor has it that no one knows just who is hiding within the armor. 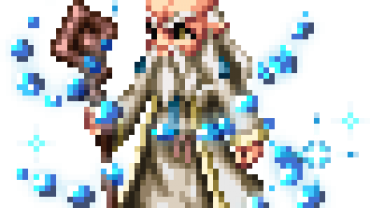