Golem is a 5-star unit that plays the Tank and Physical Attacker role. He’s a pretty decent Tank and definitely has the skill layout set up for it.

Two of his best skills for the Tank roll are Buff and Kabuff. Buff increasing DEF by 40% for one ally whereas Kabuff does it for the whole party. So for defense purposes, he’s pretty much got the entire party covered.

Forbearance is great as well acting as a protection move for the entire party with damage mitigation. So he’s very good at protecting the entire party instead of just one or two members individually.

As for his attack, he has Muster attack boosting his attack by 100% for this next normal attack. So this makes his normal attack more viable than it would normally be and that’s a good thing.

He has a fixed damage move at 400 damage which isn’t bad and the fixed damage is nice. Multifists, however, is great because it’s technically a combo move that does 4 hits and up to 2.8x damage to random enemies.

So overall, he’s a really good Tank and a decent attacker.

Verdict: Not amazing but not awful either, just somewhere in the middle.

Golem is neutral to all elements and status ailments.

Golem can equip 4 weapons and 5 armor. 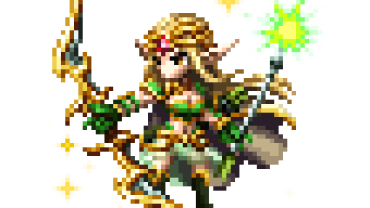