Grinfield is a 6-star unit that plays the Physical Damage role. His stats are well rounded and have a good pool of skills.

Grinfield’s biggest thing to notice is most of his physical attacks have elemental roots in them. He has coverage on the Earth, Wind, and Water elements in both physical skills and Magic.

For a physical damage unit his attacks can seem a little limited but what he has is well enough to fit his role. It helps with him having skills like Patchwork for MP restore and Enhancing Tailoring for ATK boosts.

He’s not the best physical damage unit out there but he is by no means unusable or a bad unit. He’s honestly just all around pretty basic and that makes him great for anyone who needs a physical damage and doesn’t have one of the heavy hitters.

Grinfield is neutral to all elements and status ailments.

Grinfield can equip 4 weapons and 4 armor.

The tailor of a certain royal family. Grinfield was a knight in his youth until he lost his family to the ravages of war and retired from his post. This led him to become a tailor, but he would soon face more grief as war eventually destroyed his homeland as well. He then left on a journey himself, though no one seems to know for what purpose. 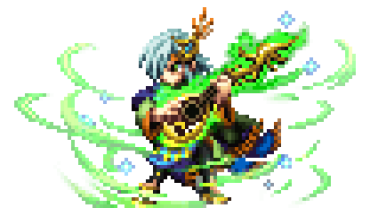