Sports and anime may seem like oil and water, but sports anime happens to be a massive genre featuring legendary hits like Hajime no Ippo (boxing), Slam Dunk (basketball), Ace of the Diamond (baseball), and Prince of Tennis (tennis, duh).

Still, in the many years sports manga has come out of Japan, there has never been a hit anime about volleyball.

Haikyu!! has changed that. 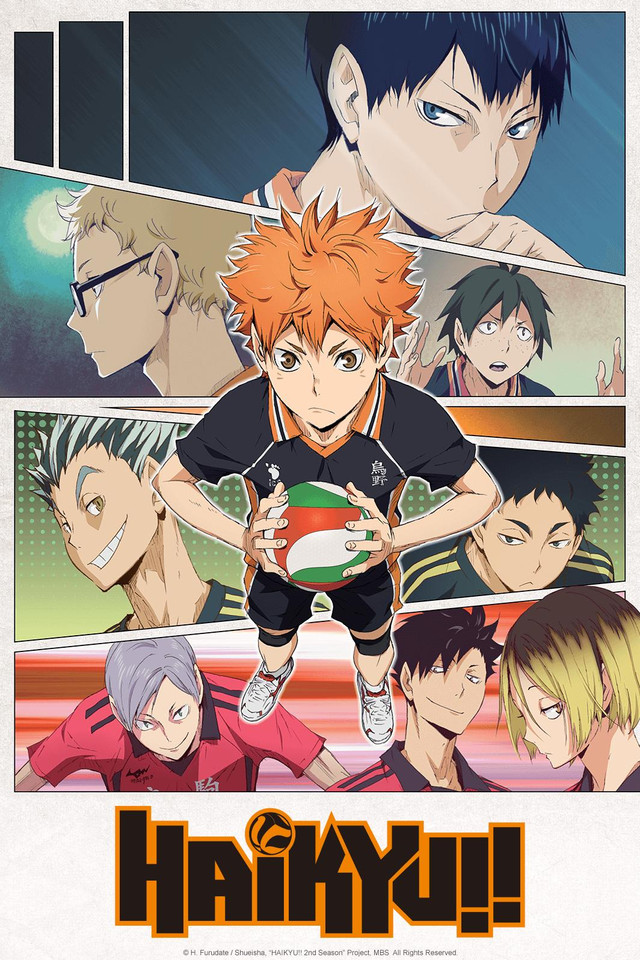 Now, before I lose you entirely, let me start off by saying this: Haikyu!! isn’t a series for people who love volleyball. I mean, if you already love volleyball, it’s fine, but you don’t have to be a hardcore volleyball fan to enjoy it.

How many hardcore volleyball fans even are there?

I didn’t know much about the sport before, other than “tall guys hit the ball over the net.”

So naturally, Haikyu!! is about a short guy hitting the ball over the net. Shouyou Hinata is a shorty, and at 162 centimeters (about 5′ 3″), would seem to be a poor fit for volleyball – except that he has incredible quickness and agility, and can jump high enough to compete with taller players at eye level.

Hinata idolizes a high school player he saw in his youth called the “Little Giant,” a player about his height who was the ace of the Karasuno high school volleyball team.

His middle school doesn’t have a volleyball team, so he spends his entire three years of middle school practicing the basics and trying to recruit enough players to play a real match. Finally, just as he is about to graduate, he pulls the requisite six people together to play a match… and his team is mercilessly crushed in straight sets.

Like any good protagonist, he finds the leader of the opposing team, “King of the Court” Tobio Kageyama, and swears to defeat him when they next meet. Which makes it awkward when they find themselves in the same high school – the same Karasuno that the “Little Giant” attended – and on the same team a few months later.

This sets up one of the core themes of the show: Kageyama and Hinata have to find a way to play together as teammates, despite a growing rivalry between them. And that has as much to do with maturity and personal growth as it does volleyball skills.

Eventually, as we are introduced to the rest of the team, we see that Kageyama doesn’t just have trouble playing with Hinata – he actually doesn’t sync up well with anybody. He plays at his own speed, without worrying about his teammates. As the setter, whose entire job it is to pass the ball to his teammates, this is a fatal flaw he must overcome.

This is part of an aspect that makes Haikyu!! stand out among among sports anime, and shounen anime in general – this is a character-driven anime, in which each member of the team has something mental or emotional to overcome.

And these aren’t throwaway things – entire episodes are devoted to characters facing their past demons, confronting weaknesses, and repenting for past mistakes. This is a huge part of the series, and every character is likable – even a few of those that aren’t on the Karasuno team.

Of course, the game of volleyball itself takes center stage more often than not, and the sequences in the game action are as beautfully animated as any action sequence, though there is an odd tendency for them to edit out the net around people’s faces. It’s jarring, but whatever, the stylish action more than makes up for it.

Haikyu!! is littered with feel-good sequences, and usually characters are put in a situation where you can see the results of their hard work – after watching them struggle and be frustrated with their weaknesses.

See, the real joy of Haikyu!! comes not in seeing the “good guy team” win, or anything like that.

It’s about getting to know the characters, and reveling in their small victories as part of larger team victories. Even bench players on Karasuno’s team have epic moments – frustrated with their limited role on the bench, they work on doing anything they can to contribute.

In fact, one of the most epic moments of the entire second season involves a character who only comes in to pinch serve, because he isn’t good enough to do anything else reliably.

The series definitely centers around Hinata and Kageyama, but the whole Karasuno team is important, and the cast is extremely well-balanced. Your favorite character will probably not even be one of those two. It may even be one of the rival team’s characters, as several of them are featured prominently as well.

I can’t really accurately describe the feelings Haikyu!! evokes, other than to say that they’re good ones. I got much of the same rush from watching it that I get from watching real sports, only real sports aren’t nearly this cool, and real sports don’t give you the same rooting interest in individual people that this does.

It really just hits all the right notes, and again, appreciation of volleyball – or any sport – is not a prerequisite. If you’re a fan of rewarding character development and stylish action with a dose of comedy, you can appreciate Haikyu!!