Kaede is a 6-star unit that plays Physical Damage role. Her stats are good having a large HP pool and decent attack which are both important for her role.

Kaede is very much a run of the mill physical damage unit. Her skills are focused on her damage like most and some of her skills have effects tacked onto them.

She does have two conditional skills which are actually really good when they’re used so that gives her a little extra. She’s in no way a bad unit she just falls into a sea of 6★ damage units.

Her ability to deal damage and boost stats, however, is a good plus for her. She has several ways to boost her ATK making her hit even harder and also has a move for a pretty good critical chance.

Her equipment is kind of basic only having 4 weapons and armor but she really only needs to be using a spear if we’re being honest. Because of her Spear Mastery trait giving her 50% ATK boost for using one.

Overall, not a bad attack unit just nothing entirely to special about her. Her conditional skills are good and her ability to deal damage is acceptable.

Verdict: A good unit worth using if you don’t have a better physical attacker

Kaede is neutral to all elements and status ailments.

Kaede can equip 4 weapons and 4 armor.

The daughter of a feudal lord from the Kingdom of Pharm. As the daughter of a noble lord, Kaede was raised to be a proper lady in a secluded environment. Although known for her polite and gentle demeanor, this wise young lady wielded her halberd atop a Chocobo with great expertise as well, making her an invaluable soldier on the battlefield. Word has it that the grace with which she used her weapon resembled the beauty of maple leaves dancing in the wind. 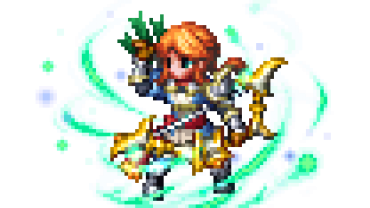