Kamui is a 5-star unit that plays the physical damage role. His skills and abilities are well balanced for his purpose and allow him to play it nicely.

Instantly the first thing that stands out about Kamui is his first ability Iai Strike. Having a 30% chance to instant KO all enemies.

This alone is a very powerful move even with the low chance of its effectiveness. But the times it does work will be very devastating in a battle.

Aside from Iai Strike all of Kamui’s abilities are very damaging. Each of them dealing physical damage and having their own effects tacked onto them.

For a 5-star he’s actually a very good Physical Damager and Iai Strike makes him stand out against some of the other 5-stars in the game.

Verdict: A good Unit. One of the better 5-Star Physical Damagers

Kamui is neutral to all elements and status ailments.

Kamui can equip 3 weapons and 4 weapons.

A young samurai from the Kingdom of Pharm who protects his people. He is a little off compared to those around him, having taken to studying the now lost bushido from texts handed down over the generations. He is proud of his distant ancestors who would commit harakiri. 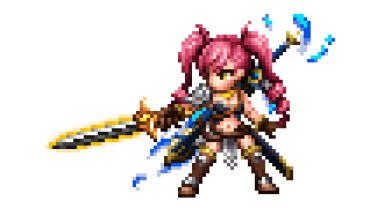