King is a 6 star character who falls into the Physical Damage role. I’d like to say King is a great long range character that matches some of the high heavy hitters but he does fall short.

King’s stats are great and make him a good damage dealer especially with all the self boosts he has. His self boosts pretty much boost his basic attack to be pretty dangerous.

It’s his skills that make him fall short because most of them are just self boosts. He only has 3 damage dealing skills and each one isn’t horrible it just feels under used.

King’s usability is limited by only having 3 damaging skills but because of his usefulness on his basic attack it’s some what made up for but not by much. Hawkeye maybe his best move simply with its 100% boost to attack.

He also has a self revive which is always helpful along with his limit burst but that’s strictly just physical damage but a nice chunk of it. But between his limited skills and limited equipment, King can definitely fall short compared to other and better 6 star units.

Verdict: Not bad but not the best

King is neutral to all elements and status ailments.

King can equip 3 weapons and 3 armors.

A young man who appears in the tales of a world divided into four nations that individually control their own unique Crystals. King was taken in at an early age, and has since been raised as a cadet to become Agito, the legendary savior or saviors. Silent and somewhat frightening, King unintentionally gives off an air of intimidation that masks his thoughtful and considerate nature. An outstanding cadet who is always levelheaded and determined, he wields the dual handguns on the battlefield without hesitation. 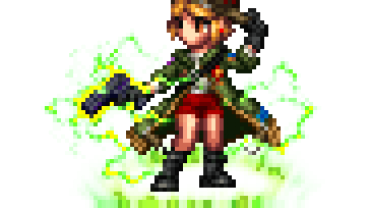