Kunshira is a 6-star unit that plays the Hybrid Attacker role. She has great stats and a lot of elemental coverage in her abilities.

Every active ability Kunshira has is elemental except for her Osmose Blade and her final skill Mageblade which are both hybrid damage. The rest are either Fire, Lightning, Water, Wind, and Light giving her a lot of coverage over elements.

And she has about 3 attacks for each element and each one gets stronger while the strongest even add a decrease of that elements resistance. So she’s very good at dishing out elemental damage and making it really hurt.

What’s great about Kunshira is she’s a magic user from all her skills but her basic attacks can work just as good. Especially with her trust master giving a 40% ATK boost when using a sword and 40% boost when wearing a robe.

But all of her elemental moves are counted as Hybrid damage. So she’s essentially a battle mage pulling from her ATK and MAG stats for damage.

In her Traits, she’s boosted in the all the right sections but has a great trait that really pushes her equipment to its limit. Spellblade Genius letting her use one-handed swords and rods in both hands basically having a sword and rod at the same time.

And that activates her trait Aide to the King which gives a 30$ boost to ATK/MAG when equipped with a sword or rod. So having both that s 60% boost on top of the 40% boost from her trust master if wearing the right equipment as well.

Verdict: A really awesome unit with some real power and elemental coverage.

Kunshira is neutral to all elements and status ailments.

Kunshira can equip 7 weapons and 5 armor.

A female Natura who lives in Gungan, a nation of beasts. Kunshira’s appearance greatly resembles that of a cat. She serves King Yashka, the ruler of the Natura tribe, as his close aide. Although her personality is on the serious side, she enjoys being outdoors like any other Natura. Unhappy with the current misunderstanding between the beast tribes, she is hoping to find a solution through diplomacy. 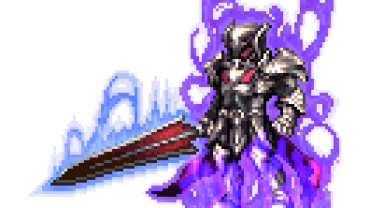