Libertus is a 5-star unit that plays a rare triple role with Tank, Healing, and Support. For having 3 roles to play his stats are actually pretty well set up for each of them.

He doesn’t really have that many abilities, to begin with, which can kind of throw you off for him being a triple role unit but there is a reason for that. Libertus is far more a Tank than anything else and his Traits really set him up nicely for that.

Having both Cover and Sentinel gives him high chances to take damage for allies and Absolute Guard only furthers this point. He also has magic which gives him two Thunder spells for damage but they’re really not the main focus of it.

Protectga is the magic that needs to be used to set up the high defense for his allies. Libertus has a few healing abilities as well but in all usability he should be focusing on Tanking more than anything.

Verdict: A Decent 5 star with 3 roles to play, a good Tank, a decent Support, and mediocre Healer

Libertus is neutral to all elements and status ailments.

Libertus can equip 3 weapons and 7 armors.

A young man spoken of in stories from the faraway land of Eos. Libertus is a member of the Kingsglaive, a special task force entrusted with protecting King Regis, ruler of the magic-sustained Kingdom of Lucis. He is originally from the remote village of Galahad, and the roots to his home run deep. Nyx, a talented fighter and also member of the Kingsglaive, is a loyal friend whom he trusts completely. Crowe, on the other hand, is someone he treats more like a younger sibling. Sometimes he is so overprotective of her that she openly voices her frustrations with his attitude. 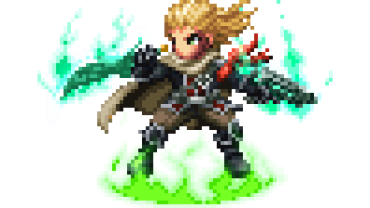