Lila is a 6-star unit that plays the Magic and Physical attacker role. She’s a decent Monk character with great stats and a plethora of skills to work with.

Lila’s main function is going to come from her final skill Open Eyes. It allows her to use Martial Arts twice in one turn so essentially Dual Black Magic for Monks.

This lets her attack twice in one turn and having that kind of usability from a Monk style character is pretty unreal. Especially since ten out of her twelve skills are Martial Arts based.

So her ability to combo Martial Arts together is pretty high. The use of Open Eyes makes Lila an incredible attacker and rival some of the best in the game.

In her Traits, she has quite a few ATK boosts which increase her damage by a wide range. Auto-Refresh for MP, a counter, and boosts for her other stats evening her out.

Overall, Lila is a very good attacker and only made leagues better because of Open Eyes. That double attack potential really sets her apart and makes her a unique Monk character.

Verdict: Lila is a great Monk character. Made even better with the use of Open Eyes so put her to use if you got her

Lila is neutral to all elements and status ailments.

Lila can equip 3 weapons and 5 armor.

A female monk who has traveled across the land to master the martial arts. Abandoned in a mountain and left orphaned, Lila was raised by a man dubbed the “martial arts master.” A naturally gifted fighter, her skills blossomed in the blink of an eye, and her initiation into the secrets of martial arts began after mastering her school’s ultimate technique at a mere 16 years of age. She began wandering from place to place once her master passed away. 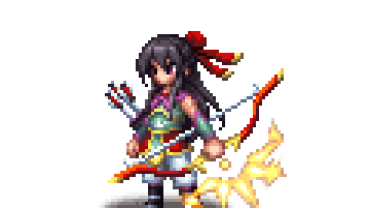