Lucille is a 5-star unit that plays the Physical Attacker and Support roles. Her stats are well rounded and her ability setup is a good mixture of both roles.

Each of her attacks has damage and secondary effects to them. Whether it’s to decrease a stat, decreasing resistances, or inflicting a status ailment. Lucille is good for debuffing enemies.

Her main focus is to deal damage even though she’s a dual role. She’s capable of mixing both sides of it giving her a good balance.

Her final skill upgrades Clear Shot which is her main attack ability. So having it upgraded to be more effective really bumps her up.

When it comes to other Support units, Lucille can be overshadowed especially when compared to 6-star units. But for what she can do and needs to do she plays the part well.

Verdict: A decent enough Damage/Support hybrid. But there are better supports out there.

Lucille is neutral to all elements and status ailments.

Lucille can equip 5 weapons and 4 armor.

A gun for hire who makes her living serving as an escort, monster hunter, or bodyguard. Lucille is a person of few words who is only interested in doing what she is paid for, and nothing else. When Ryumynui, her current employer, showed her the laborious extent of the job she was expected to carry out, Lucille was completely dumbfounded. 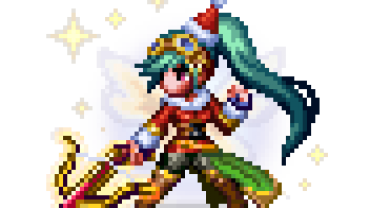