Having played a lot of MAA2 recently, I have gathered my thoughts of all the heroes available to us. I own about half of them while the ones I don’t own are based off meeting them in PvP combat and also from the opinion of other players. Check out the legend of the Marvel: Avengers Alliance 2 before looking at the chart.

Damage – A rating of how well it performs compared to other heroes. A higher rating is given when a hero can deal burst damage or good AoE damage without using up too many turns.

Type – The class of the hero. Always remember this: 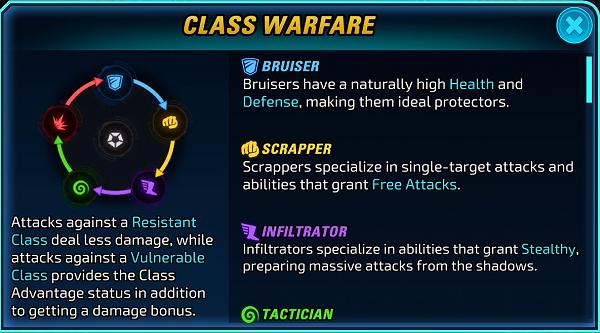 Role – The primary role of the hero.

Healing – Does the hero has healing? And what type? There are instant heals and regen.

Buff/Debuff – The ability of a hero to apply debuffs. A higher rating is given if it complements a team well.

Tanking/Dodging – This rates the hero’s ability to either take damage or dodge them. Dodging is generally better if you have very high evasion. Wasp is a great example, but she is vulnerable to very strong burst damage on the first turn.

Stealth – Can they get stealth?

Speed – This determines how often a hero will go first.

Note: The rating is based on equipping the standard ISO-8 bonuses and fighting enemies/players of similar level.