When I was first getting into manga and anime, one of the first manga I picked up was Ken Akamatsu’s Love Hina.

That was the first series I ever bought the full set of. To this day, I still have all 14 volumes.

Love Hina is one of the progenitors of the harem-based romantic comedy, and its influence can clearly be seen in Naoshi Komi’s current hit manga, Nisekoi. 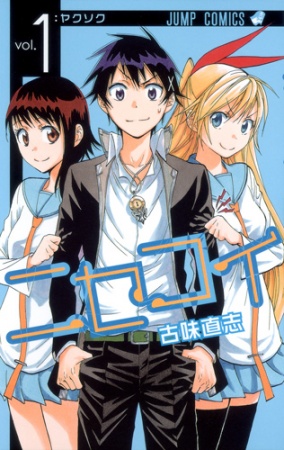 Nisekoi, or “False Love” as it’s known in English, is a story about two kids from rival organized crime units. The family of Raku Ichijo runs the local yakuza unit in charge, while Chitoge Kirisaki is the daughter of a rival mob boss.

As is the case with any crime syndicates operating in close proximity to one another, there are tensions between the groups threatening to boil over. That’s why Chitoge and Raku’s fathers have struck an agreement with one another: They are going to strike a truce between the rival gangs by hooking up their kids.

And by “hooking up,” I mean “forcing them to pretend to be in a relationship.” In reality, Raku and Chitoge don’t get along at all. They first meet when Chitoge hops a fence, nails Raku in the face with a falling knee kick.

As you can probably tell from the setup alone, Nisekoi doesn’t try very hard to avoid the usual harem rom-com tropes. Much of the drama centers around the primary love triangle, and it involves a childhood romance. Raku has a locket that he wears everywhere, and supposedly the girl he liked when he was little has the key.

But there are two girls he knows now that have keys that may fit.

There’s Raku and Chitoge, who are connected against their will. Their relationship grows from open contempt to begrudging friendship over time.

But then there’s Kosaki Onodera, the unassuming girl who Raku has been carrying a torch for since middle school. Raku wants to date Kosaki, but circumstances don’t permit him to act on it. And she (like most of Raku’s friends) has no idea that the relationship between Raku and Chitoge is anything but on the level.

Eventually, all three of them become inseparable best friends – which makes the growing romantic undertones increasingly difficult to deal with.

Now, while these three are indisputably the main characters of the show, it wouldn’t be much of a harem series with only them.

The next addition to the crew is Seishirou Tsugumi, Chitoge’s androgynous bodyguard. She is duty-bound to protect Chitoge, but also considers her a friend. She is frequently paired up with Raku on secret missions to protect Chitoge in some way, since he’s the only boy she’s at all familiar with.

Later, we get Marika Tachibana. Marika is the clingy one, who in contrast to the other girls, throws herself at Raku, pledging her eternal love for him at every turn. Also, fitting into the trend, her father is the chief of police.

So between these four, you have most of the major harem tropes: The shy and polite one (Kosaki), the tsundere with a violent streak (Chitoge), the tomboy (Seishirou), and the manipulatively forward one (Marika).

Later on, we get Kosaki’s younger sister, the openly hostile one. And later still, there’s the “older sister” character, Yui Kanakura, who is the acting don of a Chinese crime ring.

You would think with the whole “crime bosses” setup, that it would come into play for dramatic effect at some point. It doesn’t. More than anything, it’s used as a gimmick to set up a plot arc, or applied for an occasional gag. Once you’ve been introduced to the characters, the whole “organized crime” aspect basically doesn’t show up at all.

For most of the series, the “locket and key” subplot is mostly ignored as well, in favor of character-centered arcs built around deepening character relationships.

Now, the Nisekoi manga has been extremely successful, and has spawned two seasons of anime. The anime is a faithful representation of the series up to the point it covers, but the manga is much further along, and there’s something about Naoshi Komi’s art that just doesn’t translate to animation.

Komi can convey a lot with a simple facial expression. Be it shock, disgust, happiness, or revelation, the art works beautifully to express emotion, and frequently the look on a character’s face along with context says more than any words or animation could.

Another thing that has been particularly impressive about Nisekoi is the willingness to develop individual characters – even secondary ones. The manga currently appears to be making a run up to its conclusion, and it has done a great job of tying up satisfying loose ends on all characters outside the main three.

That’s one of the things that makes Nisekoi so successful – it appeals to everybody, despite being a shounen manga in name. It doesn’t objectify its characters just because. There’s no walking in on the wrong bathroom, or tripping and conveniently grabbing handfuls of breasts. The characters are all treated with respect and reverence – even the ones used primarily for comic relief.

Raku is a stand-up guy who, while oblivious in matters of love, genuinely cares about his friends and willingly throws himself into danger as needed for their sake (despite not being a skilled fighter or particularly athletically gifted).

He’s actually a pretty cool guy, who’s honest, sincere and thoughtful. He’s not just a lucky loser or piece of trash like a lot of harem protagonists. He’s a good friend to those around him, and the affection the girls around him feels natural and deserved, not forced.

A strong cast and great art are what keeps Nisekoi enjoyable, even as it tends to lose sight of its original setup. The current plot arc of the manga appears relatively final, as it is bringing many of the aspects that opened the series back to wrap up. I wouldn’t expect the manga to last more than another couple of months before hitting its final chapter.

So that being the case, there’s no better time to start reading it than now, right? I recommend it highly – especially if you liked Love Hina but could have done without all the “whoops, nudity.”