Merald is a 5-star unit that plays the Physical attacker role. Her stats are decent for a 5-star but she’s pretty limited for being an attacker.

She only has three skills which are limiting for a physical attacker. Outrider being a straight physical damage move with 100% LB increase, and her final skill Flash Axe is a Lightning element AoE.

Her other skill is Upcharger which boosts ATK by 80% for 3 turns and increases LB gauge. But all around, she really doesn’t have that much to do in her skills.

In her Traits, she has two boosts, a Killer trait giving her 50% damage on beasts, and a counter that uses her conditional skill which decreases lightning resistance on enemies by 30%.

Her Limit Break is a lightning element attack and a ATK/DEF increase to her. So she has some usage and backing in terms of damage but there isn’t really a lot to her.

Verdict: A very simple 5-star attacker. There are much better ones out there.

Merald is neutral to all elements and status ailments.

Merald can equip 4 weapons and 5 armor. 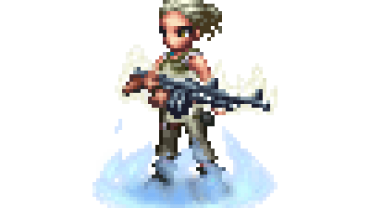