Moogle is a 6 star character that plays the dual role of Healing and Support. Moogle is an interesting unit that is built well stat wise and his skills give a lot of coverage in many different aspects.

All dealing elemental damage of their respective elements and being a great coverage for having that many different types on one unit. Aside from skills he is outfitted with White Magic and has the best spells for his healing role.

Having Cure, Cura, and Curaja in his arsenal gives him good coverage for healing whether it’s a small or large amount of health. He also is given Stona, Cleanse, and Esuna giving him coverage over most status ailments in the game.

His final skill Mog Waltz gives him access to that ability which in itself is pretty helpful. Mog Waltz recovers 30% of the users MP and HP being a great heal for Moogle.

His equipment is pretty terrible but is made up for with his exclusive equipment. This really isn’t where Moogle shines compared to the rest of his lay out.

Moogle is neutral to all elements and status ailments

Moogle can equip 1 weapon and 2 armor

A moogle that serves King Mog in the Farplane, kupo! If you haven’t heard, this moogle is a brave soul that has defeated many an enemy within the walls of the castle. An admirable warrior indeed, kupo! Moogles may be small and cute, but they hide tremendous and unimaginable power… You don’t believe me? It’s true, kupo! 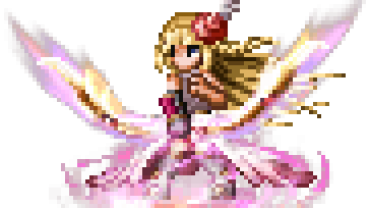