Nameless Gunner Jake is a 6-star that plays the Physical attacker role. He’s a pretty decent damage dealer with some good health and a wealth of good abilities.

Jake has 5 Assault abilities each with several effects on them. They deal damage, they decrease certain resistances, some of them add elements to his attacks, and all of them give access to his conditional skills.

These are his core attacks that will be used more often than most anything else he has. And they are very good especially with his conditional skills which are also very good.

His main function is dealing damage and his Assault moves + conditional skills allow him to do that in waves. Every turn he’ll be dishing out high damage.

Throw a healer on this guy to back him up and he’ll be a real issue for enemies. He also has a great rate for charging LB in many of his abilities.

And his Limit Burst is pretty heavy. Dealing heavy damage and cutting def by 50% on all enemies but it also lowers ATK/DEF by 99% on caster so you really gotta plan when to do this and be ready to protect Jake for two turns.

Verdict: Worth using for his damage output with Assault skills. Very good if paired with a good healer.

Nameless Gunner Jake is neutral to all elements and status ailments.

An older brother type who supports his team members during their journey with Lasswell, their newly appointed leader. Jake is aware that Lid has taken a liking to him, but simply chooses to feign ignorance. As of late he has been finding it more difficult to joke with her, however, and has begun to think more seriously about what he says around her. Once they find Rain and return to Lapis, he finally plans to address his relationship with Lid. 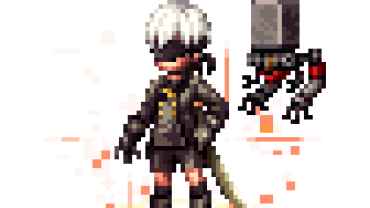