Nyx is a 6-star unit that plays the Physical Damage role and he plays it well. His stats are set up perfectly for the role and his skills are what you’d expect from this kind of character.

So, Nyx is a great Physical Attacker and that’s just at first glance. Most of his abilities are typical physical damage moves with secondary effects tacked onto them.

But what’s great about Nyx is how these secondary effects line up with some of his attacks. He has moves that can decrease enemy ATK/DEF making his next attack be far more powerful against them.

Or he can attack and decrease fire resistance, allowing his fire spells to do more damage on that target. Every one of his skills is set up in some way to make another part of his strategy come into a useful play.

Something that really stands out with Nyx is his ability Life Giver. Basically sacrificing himself into a KO and giving an ally full HP and MP.

So it’s an all-out move kind of trading one unit for another but can definitely be a game-changing move if used correctly. On top of his abilities and magic, Nyx is outfitted with a good amount of Traits, all of which are perfectly balanced for his play style.

Nyx is neutral to all elements and status ailments.

Nyx can equip 3 weapons and 7 armors.

A young man spoken of in stories from the faraway land of Eos. Nyx is a member of the Kingsglaive, a special task force entrusted with protecting King Regis, ruler of the magic-sustained Kingdom of Lucis. Although the Kingsglaive is composed of the most elite and talented warriors, among them Nyx displays a special affinity to the magical power they borrow from the king to fight. Although he is originally from a remote region far away from the reach of the royal family, he was saved by King Regis as a child, and for this, he strongly believes he owes a debt of gratitude to his liege. 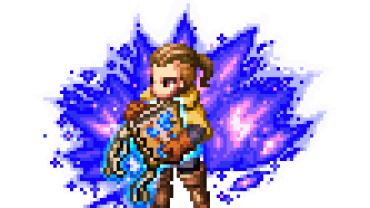