Pharaoh Abel is a 5-star unit that plays the Physical Attacker and Debuffer roles. He’s a pretty decent unit with a basic equipment and skill layout.

Abel’s skills are majority about dealing physical damage. Most of them with secondary effects tacked on and two with jump delays.

His Duty of the Pharaoh increases light resistance and Celestial Hawk decreases all stats for enemies by 30% for 3 turns. So with his active skills, he’s well rounded in his damage output with a couple of good buff/debuff moves.

His traits are pretty lacking, however, only having 3. They don’t really offer much other than basic stat boosts and higher Beast damage.

Verdict: A decent physical attack unit but can be overshadowed by stronger 5 and 6-star units.

Pharaoh Abel is neutral to all elements and status ailments.

A veteran member of the Raven, the group behind the rebellion against the empire of Zoldaad. Abel has been friends with Jake, the leader of the rebel army, for quite some time. Naturally, the rest of his comrades are rather fond of his sociable attitude as well. However, when tragedy struck after a fellow member of the rebel army was captured and brainwashed, he went on a suicidal rampage. 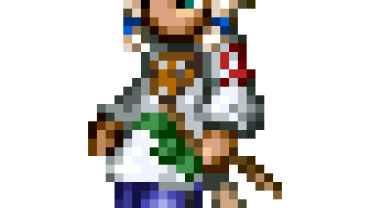