Pirate Jake is a 6-star unit that plays the Physical Damage role. His stats are well rounded and fit his role nicely and his skills make him a pretty decent character for grinding.

Pirate Jake’s active skills are an interesting mix between physical damage and pseudo support. A lot of his moves damage with some secondary effect but he also has things like Horswaggle (Escape) and Avast Matey! (Cover).

Having a bit of utility mixed into his damage capabilities is rather helpful and gives him a little more usefulness compared to other 6-star attackers. His Traits are where a lot of his utility comes from though.

Other than the typical stat boosts in Traits, Pirate Jake has some interesting ones unique to him. X Marks the Spot and Booty are great examples of what makes him such a good grinding character.

X Marks the Spot boosting gil dropped from enemies by 100% and Booty increases item drop from enemies. These two skills alone are reason enough to have him in use if you’re trying to grind money or items.

Verdict: A great 6 star attacker with good utility and great for grinding gil and items.

Pirate Jake is neutral to all elements and status ailments.

The man leading the people of the rebel army fighting against the oppressive Zoldaad Empire. Jake is a well-seasoned warrior who used Rain and his companions to his own ends, albeit without any malice behind his motives. Always seeking to aid the defenseless, he is rarely apologetic about the soft spot he has developed for the ladies. 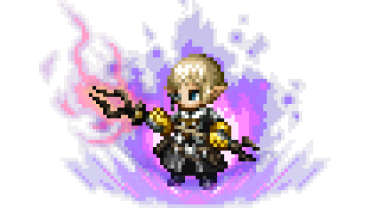