Rasler is a 6 star character that has a dual role of Tank and Healing. One thing to say about Rasler is with his skills he can become very effective against Light Element.

With Resist Light and Heir to the Throne he have up to 100% light resistance very quickly. Add that to All Resist Light he covers the entire party with resistance.

His physical damage is pretty decent and his skills are well rounded to his Tank role. Royal Obligation being one of his most effective skills because of its chance to protect the entire party from damage which completely fits his purpose.

Sentinel shares the same effect having the chance to protect one ally but at a higher rate than Royal Obligation. So for being a Tank his protection chances are very good and he holds the role nicely with his high HP as well.

And for his healing he’s outfitted with the best White Magic healing spells in the game. Cure, Cura, and Curaja for HP and he also has Esunaga for status ailments.

So over all he is very well made for a Tank/Healing and has skills that play both roles nicely. His ability to deal damage is an added bonus as well.

Rasler is neutral to all elements and status ailments.

Rasler can equip 3 weapons and 6 armor.

The prince of Nabradia who appears in tales of Ivalice, a world foreign to this one. The kingdom of Nabradia boasts of exuberant nature and bountiful resources, but it is still subject to the pressure and threats of larger sovereign states. Despite this, Rasler marries Ashe, the princess of Dalmasca, in a grand and elaborate ceremony that engulfs their nations in joyous celebration. Unfortunately, the festivities are cut short when the Archadian Empire attacks Nabudis, the capital of Nabradia. 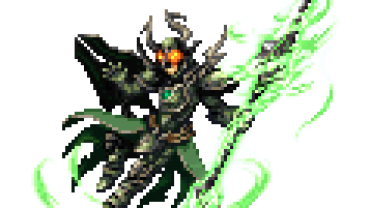