Game of Thrones did not make its original debut in box office but rather, it all started as a work of literature. Originally titled as “A song of Ice and Fire”, Game of Thrones is a 7 book series written by the legendary novelist, George R. R. Martin. 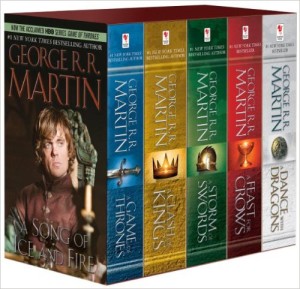 It is important that you read Game of Thrones in the correct order chronologically, if the plot is to be well understood.

1) A Game of Thrones

This is the first of the Game of Thrones series. Covering 800 pages of ink, this book has three different stories in one package; with the stories being told from a point of view of nine different characters in the novel. The first story, which forms the main portion of the book, is more political and similar to a medieval court drama.

It is largely focused on the Stark family, a family that is filled with politics and conspiracies. The second story, still in the same book, looks at the life of Princess Daenerys. She is a descendant of the last royal family and an exile. The final story shifts focus to Jon Snow, an illegitimate son of the Stark family and a member of the Night Watch, which is an elite military unit. All this drama and action takes place in the Seven Kingdoms of Westeros, a mythical land ruled by dynasties.

Review: this premier, published in 1996 undoubtedly leaves the reader hungry for the sequel. Though it is not packed with much action, the plot will leave you with mixed reactions and eventually, suspense for the next sequel will be sky high. Being a 1997 Locus Award winner and a New York Times best seller, this book will definitely give you a positive start in the Game of Thrones series.

Just as the name goes, this book is filled with battles between royalties. Drama in this 1999 Locus award winner begins when a bleeding star is seen. There are different cultures living within the land thus the bleeding star triggers different speculations that some prophecies made a long time ago are coming true. Consequently, unrest becomes an inevitable thing as the five Kings in the land get into a battle for supremacy. As the unrest rages, new rumors begin circulating in the land.

The exile princess, Daenerys, is rumored to be having dragons under her command. These creatures, according to the people in the land, should have been extinct for over 100 years. The news brings discomfort thus the people start rioting, fuelling the unrest in the land. The plot climaxes during the battle on the Blackwater, an epic battle which decides the fate of the land and all those who live in it.

Review: this sequel is better than the premier. First published in 1998 in UK and 1999 in USA, its plot is thicker and the action more engaging. The characters have also evolved, with some posing more threat than they did in the first book. This book definitely engages the reader, drawing him/her deeper into the epic fantasy world.

3) A Storm of Swords

This book catches up from the epic Battle of Blackwater. After the unrest that brought the land to turmoil in the previous book, a new reconciliation policy is arrived at. In a peace building bid, intermarriage between the seven kingdoms in the land is encouraged. Instead, the marriages get soaked in treachery, murder and deceit. Across the Narrow Sea, the Princess Daenerys is busy building an army for herself.

She embarks on an ambitious conquest of Slavers Bay and gives herself the title “Breaker of Shackles”. Jon Snow, a member of the elite army unit Night Watch is in the North with his team facing a big problem of their own. There is looming treason within the unit and a new enemy they are not well prepared to face is emerging. The arising problems in the unit trigger the selection of a new Lord Commander.

Review: this book, published in 2001, takes the brutality and horror in the Game of Thrones series a notch higher. Regicide is evident everywhere in the plot. Traumatizing and shocking things happen; which at some point may leave you in tears. Once you read this book, you will be fully immersed in the Game of Thrones fantasy and your last wish will be to hear that this book is the last sequel.

4) A Feast for Crows

Luckily, George R. R. Martin is not done yet. This fourth book still reveals the lust of power that keeps devouring the sanity of the mighty in the Seven Kingdoms. More focus has however been put on lesser characters, with betrayal and royal intrigue dominating the plot. Princess Daenerys is not going to be stopped any time soon as she continues in her conquests and defeats her enemies in Essos.

The bloodshed that dominated the previous book has left the kingdoms with power vacuums and the surviving royal households together with their rivals are scrambling for power and military advantage. This scramble culminates into an unwise revival of a military order that was disbanded, kidnappings and a kingsmoot that is established to give Iron Islands a new King.

Review: this book, first published in 2005 is actually one half of a full two book volume. The plot is not complete and there are several main characters missing in the novel. However, it still serves to fuel the momentum of the series as the reader will definitely want to read the sequel and get answers to the questions in this book.

5) A Dance with Dragons

This latest installment, launched in 2011 still highlights the minor characters in the series. Jon Snow is the new Lord Commander of the Night Watch but his reign is marred with threats and dangers as he tries to find a way to protect the North. Meanwhile, his younger brother, who was presumed dead, is on a journey to the north of the Wall, searching for a creature he saw in his dreams.

Princess Daenerys has declared herself queen in the South and in an effort to stop the bloodshed and let her subjects be at peace with her liberal policies, she agrees to marry.

Review: the action in this book has been reduced compared to the other books. Nothing really interesting and thrilling happens all through the plot, but the suspense for the next sequel still keeps burning once you finish it.