Reimi is a 6-star unit that plays the Physical Attacker role. Her stats are relatively good and her skills are well rounded for an attacker.

She has 4 direct damage dealing attacks, each dealing physical damage with some form of secondary effect on most of them. The secondary effects are in the vain of decreasing ATK, inflicting confuse, and dealing AoE damage after a delay turn.

So all of her damage dealing attacks are good with their effects. Aside from them, she has Lunar Divination which is essentially a Demi spell.

It deals 75% of the enemies overall HP dropping it to 25% of what it is. That is a massive blow to any enemy that is affected by it.

Having that big of an HP drop from an attacker and all you need is a good follow-up attack and you basically have a two-shot character depending on what you’re fighting.

Her final skill is Rush Mode which gives a 120% boost to all her stats. This combined with Lunar Divination and her good spread of damaging moves just sets her up brilliantly.

Reimi is neutral to all elements and status ailments.

Reimi can equip 5 weapons and 5 armor.

A young woman from a distant world who appears in one of many tales about the ocean of stars. Reimi’s exploits began in S.D. 10, when she boarded the SRF-003 Calnus with her childhood friend Edge as part of Earth’s Space Reconnaissance Force. The daughter of a prominent family, she has been practicing archery since infancy and has become an expert with the bow. Although she is very kind and considerate towards others, she tends to be overly strict with herself. She is the type who enjoys assisting her comrades from the sidelines more than fighting in the vanguard. 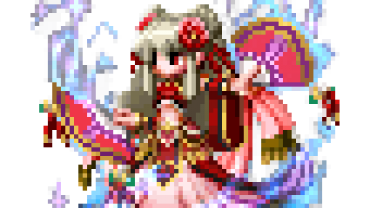