She has a handful of good healing skills and support skills from straight up heals to increasing stats or mitigating damage. She has two magic damage attack both with the light element but that’s as far as her attack capabilities reach.

However, her final skill is Hasten Speech which lets her use two skills in one turn. This changes her effectiveness completely and makes her far more useful than she would be without it.

Being able to use two skills in one turn lets her attack twice with one of her light spells, heal and use a support move, or attack and heal/support. It gives her the most utility out of what she has available to her and makes her incredibly useful in tight situations.

Overall, her damage comes from her light skills which scale with SPR so they can get stronger. But she makes a great Heal/Support and is definitely worth the use.

Rena is neutral to all elements and status ailments.

Rena can equip 3 weapons and 4 armor.

A young woman from a distant world who appears in one of many tales about the ocean of stars. Rena lived with her mother in the village of Arlia on the frontier planet of Expel, and is known for her exploits around S.D. 360. Born with abnormal healing powers, and aware that the mother she knows is not the one who gave birth to her, she has come to long for an answer as to who she truly is over time. Fond of the nearby Sacred Forest, she visits it almost daily. 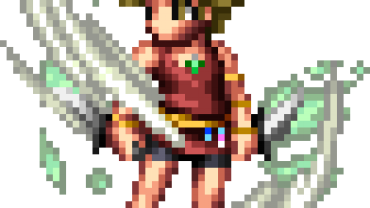