Rikku is a 6 star character that falls into the Support role. Her stats are very well rounded for her role and her skills are set up nicely to play Support.

Honestly Rikku has a lot of coverage in different ways from being able to heal and deal damage to being used as a pure Thief character. The wide range of her usefulness is what makes her an appealing unit.

Her skills have 4 elemental attacks giving her coverage over Fire, Water, Ice, and Lightning which is just good to have one a single unit. And her final skill Mega Phoenix is a little ridiculous with its 100% revive on all party members.

So from a Support stand point just by having Mega Phoenix and Al bhed Potion she is a a semi strong healer as well. The heals on top of her damage make her a force to deal with and a great party member.

And if you’re not looking to have her heal or deal damage she is set up like a classic thief character. She can be used to flee battles with Escape or just as an item hoarder with Steal and Mug.

Her equipment isn’t to bad either. Not really giving her a massive amount but she’s not over bearing or underwhelming either.

Rikku is neutral to all elements and status ailments

Rikku can equip 3 weapons and 5 armor

A young girl who appears in the tales of another world where its people are trapped in a spiral of death. Rikku is the daughter of the leader of the Al Bhed faction, a group of people who devote themselves to restoring ancient machina, and has quite a talent for technology herself. After rescuing Tidus following his sudden arrival to Spira, she offers him a job digging for her in return for food and boarding. However, a powerful beast known as Sin attacks the ship they are boarding, and the two become separated from each other. Eventually, they reunite near the river Moonflow. 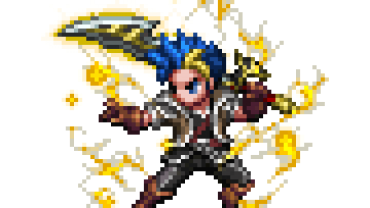