Sara is a 5-star unit that plays the Support and Healing role. Her stats and abilities are set up nicely for the dual role and she’s easy to place in any party.

I’ll start by saying that Sara isn’t a bad character by any means but she is 100% the stereo typical white magic character. Mostly meaning that with out some strong characters to play defense for her she’s going to be easy to take down.

All of her abilities are support and healing moves focusing either on healing, boosting stats, or negating damage. Her magic is set up with 2 healing spells, 2 wind resistance spells, and 3 Aero spells for damage purposes.

In all actuality the only purposes Sara will have in a party is to use her healing spells and the few support abilities she has. Her MAG stat isn’t horrible but she isn’t gonna be doing much damage with those Aero spells.

Verdict: Strictly a Healer or Support unit. Needs protection from other units to stay viable.

Sara is neutral to all elements and status ailments.

Sara can equip 4 weapons and 4 armor

A young lady hailing from another world where tales are passed down of the Crystals and the Warriors of Light. Sara is the Princess of Sasune and holds deep feelings for one of the Warriors of Light, Ingus. She is last seen when her father’s castle and the people within are cursed by the Djinn, many believing her to have been kidnapped. However, she had actually left the castle of her own volition in order to seal the Djinn with the Mythril Ring and save her people. Sara meant to face this terrible monster by herself. 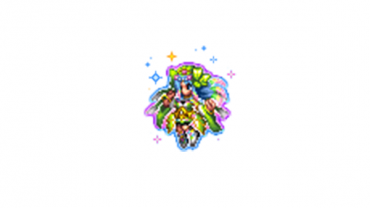