Scarmiglione is a 5-star unit that plays the Physical Damage role. Out of the 4 Elemental Archfiends, he is probably the weakest in stats but that’s to be expected with him being a 5 star.

His skills, however, aren’t too bad because of their damage capabilities and the secondary status ailments they can cause. On three of his attacks, he can inflict Poison, Disease, and Blind, all decent ailments.

But with his final skill Gas, he can inflict poison, blind, sleep, silence, and disease at 20% chance. The damage Gas does is good on its own but that added chance of having all of those status ailments inflicted at once is extremely good.

For a 5-star he is actually a pretty good attacker so if you’re looking he is definitely a good candidate. He has 2 ATK boosts in his traits, plus a 100% resistance to Poison, Sleep, and Disease.

He also has thunder spells which gives him some extra elemental coverage. So all around he’s not a horrible 5-star, but when put up against the other Archfiends he’s not gonna stand out much.

Verdict: A good 5-star unit for his status affilictions and decent attack.

Scarmiglione has a 20% resistance to Earth and Dark with a -20% on Fire and light. He is neutral to all other elements and status ailments.

Scarmiglione can equip 5 weapons and 5 armors.

One of Golbez’s Archfiends who appears in the tales of a blue planet watched over by two moons. Scarmiglione commands the element of Earth and also wields the power to manipulate the undead. Hoping that Scarmiglione’s powers prove to be the downfall of Dark Knight Cecil, Golbez orders the Archfiend to do away with him at Mount Ordeals. Although Scarmiglione manages to remain unscathed after facing Cecil’s dark sword in battle, the dark knight’s companions Palom and Tellah use their magic to subjugate him, causing the Archfiend to fail his mission. 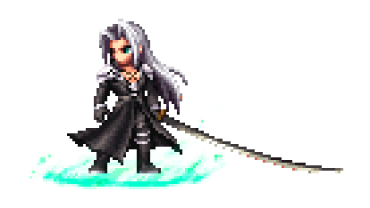