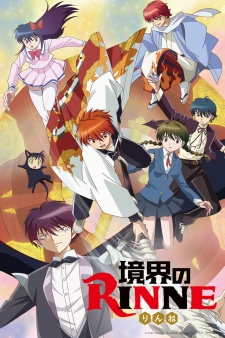 Here are my top picks for anime like RIN-NE. Keep in mind the list is in no particular order. Enjoy the recommendations! Hibiki Amami, a high school student, is a girl that can sense ghosts. Lots of ghosts are always around her as she treats ghosts and humans equally. Just by Hibiki being there, a boring school suddenly turns into a haunted mansion. But, humans aren’t taking a loss there. The friends around Hibiki are all so amusing with a quirk or two. Surrounded by people and ghosts like that, sometimes she runs around in confusion, but for Hibiki everything is cherished and irreplaceable.

One fateful day, Yuuji Sakai ceases to be a regular high schooler—he becomes trapped in a crevice of time and is suddenly attacked by a Denizen. Coming to his rescue just in the nick of time is a nameless hunter who seems no different from an ordinary young girl except for her blazing eyes and burning crimson hair. However, before Yuuji can learn anything more about his situation, he discovers that he has already been reduced to a Torch—merely a scrap of memory waiting to be extinguished.

Saotome Ranma, a teenage martial artist, and his father Genma travel to the ‘cursed training ground’ of Jusenkyo in China. There, despite the warnings of the Chinese guard, they fall into the cursed springs. From now on, whenever Ranma is doused in cold water, he turns in to a girl, and a cute, well-built red-head at that. Hot water changes him back into a man again, but only until the next time. To make matters worse, his father engages him to Tendo Akane, a girl who hates boys. Rikuo Nura appears to be an average middle school student. No one knows that he comes home every day to a house full of youkai, nor that he transforms into the all-powerful leader of these spirits at night. However, much to the disappointment of many, Rikuo is determined to live as normal a life as possible.