The Jinx: The Life And Deaths Of Robert Durst(2015) 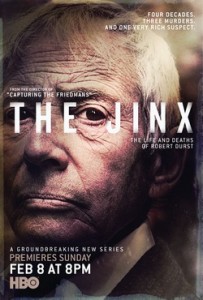 A groundbreaking six-part documentary directed and produced by Andrew Jarecki and produced and shot by Marc Smerling (the Oscar nominees behind “Capturing the Friedmans”) delves into the strange history of real estate heir Robert Durst, long suspected in the still-unsolved 1982 disappearance of his wife as well as the subsequent murders of family friend Susan Berman and neighbor Morris Black. It features an extended, revealing interview with Durst himself, with whom Jarecki developed a unique relationship following the release of “All Good Things,” Jarecki’s 2010 feature about Durst’s life starring Ryan Gosling and Kirsten Dunst.

Counselors and campers check in for what’s billed as “the summer of your life” at Maine’s Camp Firewood in 1981. The Netflix original is a prequel to the 2001 cult film “Wet Hot American Summer,” and features many of the same actors, portraying even younger versions of themselves than they did in the film. Reuniting the original cast was no small feat, given the busy careers of Paul Rudd, Elizabeth Banks, Christopher Meloni, Janeane Garofalo, Bradley Cooper and Amy Poehler. New to camp in 2015 are Chris Pine, Jon Hamm and Kirsten Wiig. Original director David Wain helms the series, and he and Michael Showalter penned the scripts.

Catherine Cawood (Sarah Lancashire) is a strong-willed police sergeant in West Yorkshire, still coming to terms with her daughter’s suicide. Just as she seems to be getting back on top of her life, she spots standing on a street corner in her town Tommy Lee Royce (James Norton), the man she believes is responsible for the brutal rape that impregnated and drove her daughter to suicide. Catherine soon becomes obsessed with finding Royce, unaware that he is involved in the kidnapping of Ann Gallagher (Charlie Murphy), a plot instigated by Kevin Weatherill (Steve Pemberton) and orchestrated by Ashley Cowgill (Joe Armstrong). Things quickly take a dark turn as the abductors scramble to keep the kidnapping secret, although Catherine is onto them.

When shocking photos of high-school student Taylor Blaine show up on social media after a party, the boy accuses two basketball players from the elite private school of posting the pictures after drugging and assaulting him. Taylor and his mother stand as the school’s wealthy families attack them while the school’s headmistress fights to maintain the school’s reputation. At the same time, Taylor’s girlfriend faces issues of racial tension at her own school, and while the two institutions are widely different in status, the lives of students and teachers at both become entangled.

Reality shows are often full of drama, but in the case of dating show “Everlasting,” there may be more drama behind the scenes than there is in front of the camera. Executive producer Quinn commands her staff to get dramatic and outrageous footage for the show, which forces young producer Rachel to manipulate the relationships among the contestants to get the show’s final cut to match Quinn’s vision of it. As show star Adam searches for his perfect mate, the show’s staff members deal with their own romantic predicaments on the set. Rachel’s ex-boyfriend is one of the show’s cameramen, and his current fiancee, Lizzie, is the makeup artist.