After being on the air for more than three decades, the essential format of this show hasn’t changed: Get an A-list guest host (or reasonable facsimile) and throw him or her into sketches with the ensemble players, which have included such heavy hitters as Will Ferrell, Jimmy Fallon, Tina Fey, Amy Poehler, Kristen Wiig, Jane Curtin, John Belushi, Chris Rock, Eddie Murphy, Chevy Chase, Bill Murray and Mike Myers. Each week’s show also offers two musical numbers from someone at, or aspiring to reach, the top of the charts.

Leslie Knope, a midlevel bureaucrat in an Indiana Parks and Recreation Department, hopes to beautify her town (and boost her own career) by helping local nurse Ann Perkins turn an abandoned construction site into a community park, but what should be a fairly simple project is stymied at every turn by oafish bureaucrats, selfish neighbors, governmental red tape and a myriad of other challenges. Leslie’s colleague Tom Haverford, who delights in exploiting his position for personal gain, is as likely to undermine her efforts as to help her, while her boss, Ron Swanson, is adamantly opposed to government in any form, even though he’s a bureaucrat himself.

Based more-than-loosely on backstage shenanigans at “Saturday Night Live,” “30 Rock” centers on young Liz Lemon, currently head writer for a live sketch-comedy show in New York. Complications follow when the network’s new president orders Liz to hire mentally unstable movie star Tracy Jordan to join the cast, throwing neurotic leading lady (and Liz’s best friend) Jenna Maroney into a tizzy. Liz tries to juggle all the egos around her while trying to chase her own dream.

Political satirist Stephen Colbert takes on cable-news pundits in this show, which centers around his essential rightness about the issues of the day. Colbert portrays a caricature of conservative political pundits often seen on TV. The show is known for coming up with new words that enter the lexicon, perhaps most notably “truthiness.” 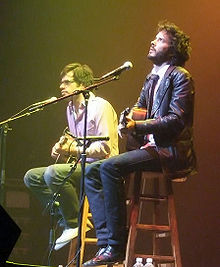 Flight of the Conchords is a New Zealand-based comedy band composed of Bret McKenzie and Jemaine Clement. The duo’s comedy and music became the basis of a BBC radio series and then an American television series that aired for two seasons on HBO.

Michael Bluth finds himself forced to stay in Orange County and run the family real estate business after his father, George Bluth Sr., is sent to prison for committing white-collar crime. He tries to juggle the wants and needs of his spoiled and eccentric family while being a good role model for his teenage son, George Michael.