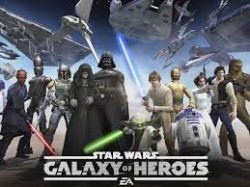 We are all dying to know what our character stats look like at max level and stars. You gotta thank SWGOH Cantina fan site for this data that I will share with you below. If you want to share the stats of your max level characters, please submit info here and help out the community.

Strength Growth Modifier – Amount of Strength gained per level. Varies on the character.

Agility Growth Modifier – Amount of Agility gained per level.  Varies on the character.

Intelligence Growth Modifier – Amount of Intelligence gained per level.  Varies on the character.

Speed – Determines the rate in which this character gets to take a turn.

Physical Damage – Used to calculate damage death by all Physical abilities. Reduced by the opponent(s) Armor.

Armor Penetration – Ignores an equal amount of the opponent(s) Armor.

Special Damage – Used to calculate the damage dealt by some Special abilities. Reduced by opponent(s) Resistance.

Critical Damage – Increases the amount of damage dealt by a Critical Hit.

Potency – Increases the chance to apply detrimental effects to opponents.

Tenacity – Increases the chance to ward off detrimental effects.