In football, a lot of emphasis is placed on the strikers and attacking midfielders who dazzle the fans with their elegant dribbling and attacking skills. However, most people tend to forget the true backbone of a team, the goalkeepers. These players, play the most important position on the field; preventing the opposing players from finding the net. Below is a look at some of the best goalkeepers in the 2015-2016 season (The list is in no particular order).

Manuel Neuer is a German international goalkeeper who plays for the German league side, Bayern Munich. Neuer is without a doubt the best goalkeeper in the world, having helped Germany win the 2014 world cup finals where he received the Golden Glove award. Neuer is also a key player for Bayern Munich, helping the club win the UEFA Champions League during the 2012-13 season and the Bundesliga title during 2012-13, 2013-14, and 2014-15. He has also been instrumental in Bayern’s title charge this season, making 58 saves and achieving 18 clean sheets in 29 games.

Peter Cech is a Czech Republic goalkeeper who plays professional football for the Barclays Premier League side, Arsenal. Cech is one of the most prominent goalies in the Barclays Premier league, and his recent move to the Arsenal has had a tremendous boost to the north London side this season. His quick reflexes and incredible ability to stop shots has helped the Gunners in their aspirations to win the 2015-16 Premier League title.

Joe Hart is the number 1 undisputed keeper for the England national football team, and he will be one of the players to watch out for during the upcoming Euro 2016 competition. Hart, who plays for the English Premier League side Manchester City is one of the best goalkeepers in the English Premier League, and his incredible performance and ball stopping skill has been of great significance in the club’s title chase this season.

Kasper Schmeichel is a Danish Professional football player who is the first choice goalkeeper for the English Premier League side Leicester City. The 29-year old has risen to become one of the top Premier League goalkeepers, and he has been instrumental in Leicester City’s premier league title aspiration this season with 14 clean sheets in 33 appearances. He is also the son of legendary goalkeeper Peter Schmeichel.

Gianluigi Buffon is the star of the Italy National Football Team. He is one of the best keepers of all time, currently ranked number 2 best goalkeeper behind Manuel Neur. Despite being one of the most senior players (he currently boasts of a 20-year career at the age of 37), Buffon has managed to maintain his brilliance between the posts. He currently plays professional football for the Serie A side, Juventus. 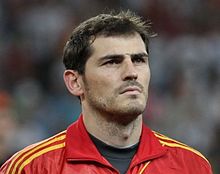 Iker Casillas is a Spain National Teal goalkeeper who recently made a move to Portugal’s Primeira Liga side FC Porto. Casillas is one of the best goalkeepers of all time, having captained Spain to win two UEFA Euro cups and one World Cup. He has also enjoyed an exemplary football career, having won 5 La Liga titles and 3 UEFA Champions League titles during his 16-year long career at Real Madrid.

David de Gea is one of the youngest and upcoming goalkeepers who are currently dominating the world of football. De Gea, who is currently ranked as the 4th best goalkeeper in the world is a vital player for Spain’s national football team and Barclay’s premier league side, Manchester United. His brilliant performance has made him the envy of top European clubs such as Real Madrid, who were looking to secure his services at the start of the season.

Diego Lopez is a Spanish international football player who plays professional football for the Italian Serie A side, AC Milan. Lopez is well known for his representation of Spain and Real Madrid in various matches. He is a brilliant player, who managed to surpass over ten goalkeepers during the 2015 goalkeepers’ rankings.

Hugo Lloris is the first choice goalkeeper and the captain of the French National team. He is an excellent goalie, who incredible reflexes and absolute command of the penalty area gives opposing attacking players a hard time. Lloris currently plays for the English Premier League club, Tottenham Hotspurs, and he has been a key player in their title chase this season.

Igor Akinfeev is the number one goalkeeper for the Russian national football team, and also the captain of the Russian Premier League side, CSKA Moscow. The 30-year old has spent his entire football career with the CSKA Moscow, making his debut at just the age of 16 years. He has since made over 450 appearances for his club, helping them win 5 league titles and one UEFA Cup title. Igor is one of the most prolific goalkeepers in Russia, and he set a new record of 234 clean sheets during the 2015-16 season.