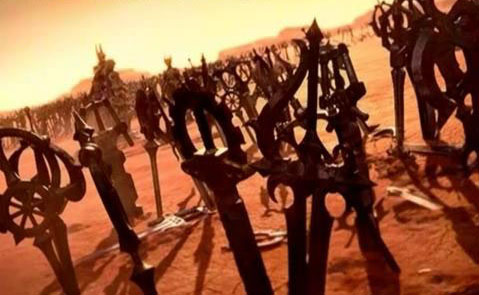 Kingdom Hearts is known for many things. One of which is the interesting design of the Keyblade, a sword-like weapon in the shape of a key.

Throughout the franchise, there have been dozens of different Keyblades. Each with their own designs and unique ability uses.

In this list, we’re going to go over ten of the best Keyblades in Kingdom Hearts. It’ll be based on their Keyblade design, ability as a weapon in the game, or its significance to the story. 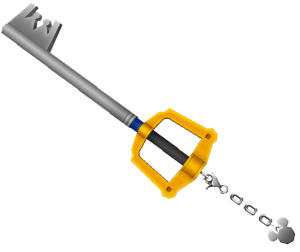 The Keyblade that started it all in the first Kingdom Hearts. The Kingdon Key is the true form of Sora’s Keyblade in the series.

Its design is pretty simple looking like an oversized house key. But it’s the simplistic design that really makes it stand out among all the other Keyblades out there.

In the game, it doesn’t have any actual ability that changes stats or effects Sora in any way. But this is the base Keyblade that can have keychains attached to it in order to use other Keyblades.

Its importance to the series, being the main characters base weapon, and the Keyblade that allows him to use others is what makes it Number 10 on this list. 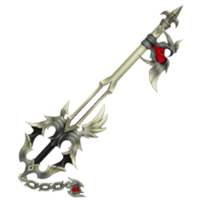 The Lost Memory Keyblade is Ventus’s equal to the Ends of the Earth Keyblade for Terra and the Stormfall Keyblade for Aqua. It’s a Keyblade he gets late in his story that replaces his base Keyblade.

Its design is an interesting one being a silver/white color. The hook of the key is a wing with a half heart in the core of it.

The Keyblade itself seems to symbolize Ventus’s relationship with Vanitas. Both being one half of each other and Ventus’s “Lost Memory” of no longer being part of Vanitas.

Its use in battle gives it a long reach with a higher crit chance. And when it does deal critical hits the damage it does is greater than any other Keyblade. 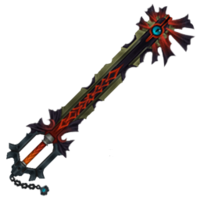 This Keyblade is a Terra exclusive that really empowers his already incredible strength. Chaos Ripper has no use for Magic what so ever but it greatly enhances strength.

So the attack of this Keyblade is really impressive. And it being on Terra who already has crazy strength just makes it a great brute Keyblade.

Its design reflects Terra’s fall into darkness, being given right after defeating Master Eraqus. It’s actually somewhat similar to how Master Xehanort’s Keyblade looks, having the same kind of eye built into it.

By looks alone, it is an interesting Keyblade. But its overall power and place in Terra’s story give it a big significance in the series. 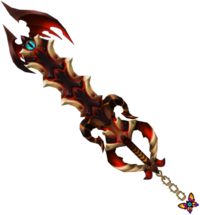 Similar to Chaos Ripper but almost as if an opposition in terms of stats. It does little for strength but has high magic power and critical rate.

It’s a very good Keyblade for both Sora and Riku depending on how you have their command decks built. Filling them up with magic makes this Keyblade a powerhouse.

The design of this Keyblade is once again similar to Master Xehanort. Having the same strange eye built into it and almost as if it’s a cross between it and Chaos Ripper because of its similar color palette and look.

It is an optional Keyblade so it doesn’t really hold any place in the story. But its usefulness and look are pretty great overall. 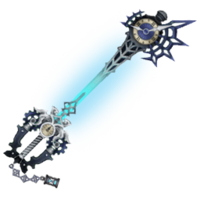 Speaking of Master Xehanort’s Keyblade. No Name is directly based on the Keyblade that Young Xehanort has, with the same clock and time theme to it.

Much like End of Pain it grants a high boost in magic, crit chance, and has long range. No Name is heavily connected to the story of Dream Drop Distance.

And I=its part in the story is what’s interesting. No Name for players is an optional Keyblade gotten by battling the Unknown boss in Birth by Sleep.

All 3 of the characters in the game can get it. But even being an optional Keyblade it’s significance to the story is massive because it is actually Young Xehanort’s Keyblade from Dream Drop Distance.

There are slight differences in the way the two look across both games. But there is no denying how important this Keyblade is in the grand scheme of things. 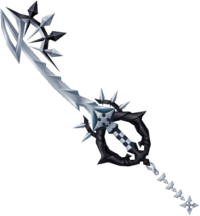 A Kingdom Hearts 2 FM+ exclusive Keyblade. Two Become One is only gotten after the incredible Roxas boss fight in KH2FM+.

It does not have any real ability to combat other than it’s great stats. Its ability is just a fast way to unlock Final Form after you obtain it.

When you equip it Sora has a 50/50 shot to enter Final or Anti form when any form is used. So it’s the best way to unlock Final Form when you get it.

But its design is a direct reference to both Sora and Roxas becoming whole again. Hence the name Two Become One, there are a lot of little details on this Keyblade that refer to Roxas as a Nobody from its color scheme to the sharp spiky design like most of the Nobody art. 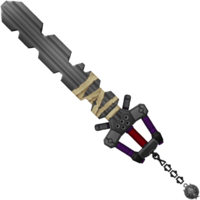 An optional Keyblade in Kingdom Hearts 2 that is gotten after defeating Sephiroth. Like most optional ones there is no real significance to the story, though beating Sephiroth does drive the Cloud subplot further.

What makes Fenrir so great is its power and design. It’s physically the strongest Keyblade in Kingdom Hearts 2 and it has the negative combo ability which is great for some boss builds.

But its design is what’s so cool about it. Out of every single Keyblade across the Kingdom Hearts franchise, Fenrir is the only one that is made to look like a car key.

Or more specifically a motorcycle key because it’s based on Cloud and his weapon. Being a mixture of his Buster Sword with the shape and bandages to boot, while keeping the “Key” theme is that of a car or motorcycle.

It’s a great little Final Fantasy reference to the character in the game. And it really stands out because of the unique design. 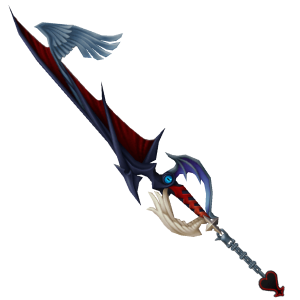 This Keyblade is the Kingdom Key equivalent to Riku. It’s his base Keyblade in Dream Drop Distance and has a balance of strength and magic.

Its design is what really makes it stand out because it’s almost a direct reference to Riku’s evolution as a character. The base of the Keyblade is Riku’s Soul Eater sword from Kingdom Hearts one.

That’s the weapon he uses when he falls into darkness and you battle at Hollow Bastion. But the sword has changed gaining the angel wing hook for the Keyblade teeth and the hilt getting the same design.

It’s a perfect representation of Riku’s “Road to Dawn” being on the road between light and darkness. And it really sums up his personal story nicely. 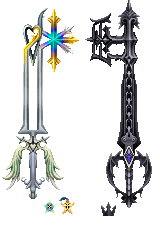 These Keyblades are on this list together because of their equal significance to Sora as a character and their usability for Roxas. Oblivion is a black Keyblade that is meant to symbolize darkness and Sora’s friendship to Riku while Oathkeeper symbolizes light and Sora’s promise to Kairi.

These two Keyblades are direct ties to both Riku and Sora which is why Oblivion focuses strength and Oathkeeper focuses magic. And when Roxas gains his Keyblades they become these two because of the bond they represent for Sora.

Their place in the story is what’s interesting. Oathkeeper is gotten directly from Kairi when Sora makes his promise to her while Oblivion is gotten in a chest inside of the boss room where you fought Riku the second time.

One of them seems entirely optional to get, yet its significance in the later games is highly implied. These two are as much a staple to the game as the Kingdom Key is. 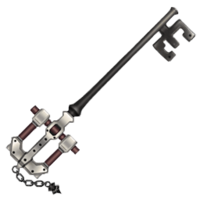 The Master’s Keyblade. This is the Keyblade used by Master Eraqus and taken up by Aqua during the secret episode and the 0.2 episode.

This Keyblade is a very simple and sleek design being very closely based on a samurai sword. It has no other ability other than having incredibly high stats and long range.

Its significance in the story is probably as important as the Kingdom Key itself. This Keyblade is a representation of Master Eraqus and the role he played in both Terra and Aqua’s story.

Aqua taking up the Keyblade of her master who was struck down by her closest friend. Who she then has to use the same Keyblade to defeat after being taken over by Xehanort.

Master’s Defender and Xehanort’s Keyblades go hand in hand with one another almost as well as Oblivion and Oathkeeper. In terms of gameplay it is Aqua’s best Keyblade for stats and looks best with her and the story behind it just reflects how deep and well put Aqua’s story is throughout the game.