Well, if you are on this page, you are probably an anime fanatic. Haikyuu!! is simply the best when it comes to plot, adventures and even moral attributes. Here, you will find a review of the top 10 Haikyuu characters as voted by fans from both season 1 and 2. Each of the seasons comes with 25 episodes.

Kenma is of average height and a small build. He doesn’t have any outstanding features apart from his cat-like golden colored eyes and blonde hair with black roots. Usually, Kenma is very relaxed and has a laid back personality. In other words, he never gets fired up or excited about anything and always keeps his cool. He doesn’t voice his opinions as he is afraid of how others might think of them. As a child, he was completely unable to make friends by his own. Kuroo was his only playmate.

Tanaka has sharp blue eyes and a shaved head in the anime series. This makes people mistake him to be delinquent. He has a lean build and an average height. Often, he makes strange faces to intimidate or scare others.

As expected, Tanaka is hot-headed, easily angered, and loud and loves to pick fights. Somehow, he is also a slacker/latecomer as he is always late to arrive at practices. On the other hand, he is supportive, caring and protective when it comes to his teammates.

Tsukishima is the middle blocker in the Karasuno High Volleyball Club. He has an average build for a volleyball player and is very tall. Even though he is a first year, he is the tallest players at Karasuno High. He has blonde hair, golden brown eyes and thin eyebrows.

Tsukishima has the habit of annoying people (especially Kageyama and Hinata) and is very blunt. He doesn’t like to exert too much effort and dislikes ‘hot-blooded’ people. He is rude to all other players except Daichi, Asahi and Sugawara. 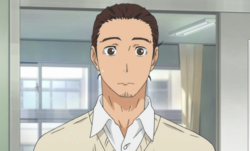 Azumane has long hair which is styled as a bun behind his head. He has dark brown eyes which match his eyebrows as well as his hair. His appearance makes him look older and unapproachable. However, he is gentle and quiet.

Kuroo is a third year student from Nekoma High and is depicted to be tall and thin. He has a muscular but slender frame. His features appear sly. Kuroo’s pupils are cat-like and has narrowed eyes.

Kuroo has a laid-back yet scheming personality. In the anime series, he is considered a ‘provocation expert’. This character manifests itself when Kuroo angers Kei Tsukishima during the Tokyo Expedition Arc.

Oikawa is a third year student from Aobajōsai High and is the volleyball team captain. He has dark-chocolate brown hair with eyes blending ibn with this color. Many students find him attractive – girls follow him around just to talk to him. Despite his flirtatious and childish nature, he is a well-rounded, excellent and very serious when it comes to volleyball.

Sugawara is a third year at Karasuno High. He is of average height with a slender build. His hair is light grey while eyes are hazel brown. If you look closely, he has a mole under his left eye and is always seen with a gentle smile on his face. As the vice-captain, he has a soothing personality and acts as a pillar of support for his teammates.

Nishinoya is a second year student at Karasuno High. He is the shortest person on the team with a fair muscular build. He styles his wild hair by ruffling most of it upwards adding 10 cm to his height. Nishinoya is very energetic and temperamental. His overall boisterous nature can attract unwanted attention easily and it usually ends badly for him.

Hinata is the main protagonist of Haikyu series. He is a first year. Hinata’s height is 162.8cm which ranks him as the second shortest person in the team. He has brown eyes and a messy orange hair. Usually, Hinata is energetic and cheerful. He is a natural schmooze and for this, his teammates use him once in a while to win someone over.

Kageyama’s impressively sharp glare and height are known to be his most prominent physical characteristics. He emits an intimidating aura which is heightened by an almost permanent scowl on his face. His personality can be termed as short-tempered and sullen. He is also seen as a perfectionist and cares about nothing else but winning.