Vargas is a 6 star unit with the Physical Damage role. He is a great physical attack character and highly depends on the Fire element.

Vargas’s use of Fire element is really good and helpful especially if you’re looking for a unit that specializes in something like this. His fire resistance is 50% so that alone is a great defensive coverage against enemy Fire attacks.

His skills are all based around dealing Fire Physical Damage and only one of his attacks is basic Physical Damage. Sacred Bravery doesn’t have the bonus Fire damage but it does have the secondary effect to increase the attack of all allies by 60% for 3 turns.

Vargas is really good in this set up because increasing his attack just makes him an even deadlier attacker. And with his trust master giving him a +130 increase to his attack and his natural ATK+ boost his attack can get pretty high.

Adding onto that with Fire Creator’s Power he can increase his attack even further while also adding 50% fire resistance giving him a full 100% resistance to fire. So when it comes to dealing flat damage and buffing his Fire defense he is covered in both area’s rather nicely.

As for his attacks themselves they are gonna hit hard if his attack is boosted up with all his buffs. Flare Saber, Brave Strike, and Flare Ride+ are all Fire Physical Damage attacks that are going to deal some nice damage even before having the attack buffs.

His final skill Supreme Blaze is a nice heavy hitter that ignores Defense making the damage even more devastating. And his exclusive materia, Break, is a great physical attack that decreases all 4 major stats for 3 turns.

Verdict: A great 6 star unit with some of the best Fire element coverage in the game

Vargas is 50% resistant to Fire, and neutral to all other elements and status ailments.

Vargas can equip 4 weapons and 6 armor.

A legendary knight from another world where humans and gods share a history. Vargas is a swordsman from the ruined Agni Empire who later became one of the Six Heroes of lore. He trained in the long sword to surpass the accomplishments of his late father, also an exceptional knight of the empire. Dubbed a master swordsman, he was well-known for his defeat of countless warriors. However, still believing himself inexperienced, Vargas is said to have continued his search for stronger opponents in order to further his training. 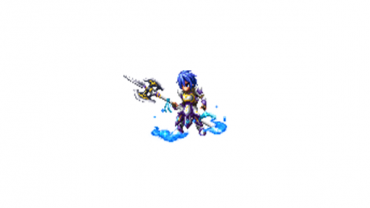