Veritas of the Earth is a 6 star unit with the Tank role. This guy is seriously set up nicely to be a tank and has the stats to back it up.

Veritas of the Earth is set up with skills all designed around dealing damage and absorbing it. Things that allow him to decrease damage taken to him or completely block damage for allies.

In his Traits, he’s given buffs where it counts boosting his DEF, SPR, and HP. These buffs really put him over the top making him a great Tank character and only make his skills all the more effective.

This guys main purpose is to play aggro and absorb all the damage coming at the party and with his final skill Incinerating Press he gets 100% chance of being targetted for 2 turns. Having this immediate target function makes it so the rest of the team gets off completely free to do whatever they need to for 2 turns.

On top of his skills and Traits, he has 3 stone magic spells giving him some decent Earth coverage. But it’s not really an addition or a take away from the character, it’s just a nice little bonus form of damage.

Veritas of the Earth is neutral to all elements and status ailments.

Veritas of the Earth can equip 4 weapons and 6 armor.

One of the Sworn Six of Paladia who encountered Rain and his friends while they journeyed through Mysidia. Deeming Fina as a worthy opponent, Veritas of the Earth has been pursuing her in hopes of facing her in battle. However, he quickly loses all hope of fighting a deserving opponent upon realizing that she has lost both her powers and memory. A proud man, he looks down on the weak, but assesses everything with collected composure. 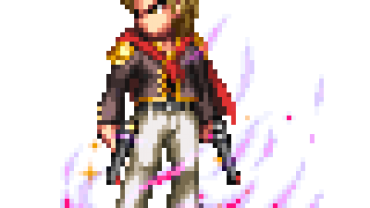