Wadow is a 6-star unit that plays the Hybrid Attacker and Buff role. He’s got great stats to back up his skills which give him some pretty good coverage.

A lot of Wadow’s active abilities deal hybrid damage and give him some elemental coverage with mostly Light and Earth element. He also has coverage with resistance over both elements along with damage mitigation.

His specialty is Earth and Light so he has a natural resistance against both elements along with his abilities able to buff that. So he’s a great unit to send into battle when facing enemies that use those two elements.

He has a heal, some status protection, and the use of Throw and Hide both of which fit his Ninja job theme. But one of his best attacks are his conditional skills Super Dog Attack Light and Earth.

Both of these are triggered by Afterimage Technique and they each deal 10x Earth or Light damage while decreasing Earth and Light resistance by 60%. So they are two pretty heavy hitting skills he has and adding to his Earth/Light coverage.

Verdict: Not a bad unit especially with his specific coverages.

Wadow is 40% resistant to earth and 20% to light. He’s neutral to all other elements and status ailments.

Wadow can equip 7 weapons and 4 armor.

A male Natura who lives in Gungan, a nation of beasts. Wadow’s appearance greatly resembles that of a wolf. As a bodyguard of King Yashka, the ruler of the Natura tribe, he considers everyone who isn’t on his liege’s side to be an enemy. Taking his duties extremely seriously, he came to strongly resent the Shibyra “strangers” early on, and Kunshira as well for once having been part of the tribe. 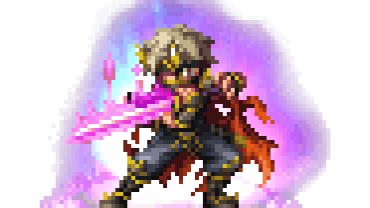