William is a 6-star unit that plays the Magic Damage and Support roles. He has good stats and a good skill layout that fits his Black Mage job.

The first thing to note about William is his lack of a lot of magic. He has four spells, two Stone spells, Osmoses, and Quake.

This can seem somewhat limiting but it’s not entirely bad. It gives him really good Earth coverage and Osmoses is a great MP drain.

In his skills, he has Dual Black Magic giving him two attacks with any of his four spells each turn. Fossil Glare which is a good 50% petrify move.

He’s also outfitted with two buff/debuff moves in Withdraw and Open Heart. Both giving one buff to a stat and a decrease to a stat for all allies.

So it’s a bit of a double-edged sword depending on the kind of party you run. But it’s an interesting support style that balances out in the long run.

Verdict: A decent magic damage unit with a good coverage of Earth element.

William is neutral to all elements and status ailments.

William can equip 4 weapons and 6 armor.

A kind and gentle black mage belonging to the knights of Grandshelt. However, he’s weak when it comes to performing, and is ranked even lower than Loren who entered after him. Together with Chloe, he is investigating a kidnapping which happened in Grandshelt. 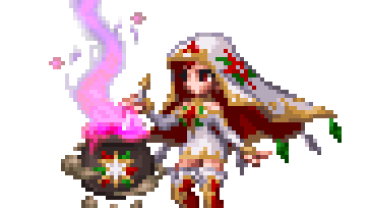