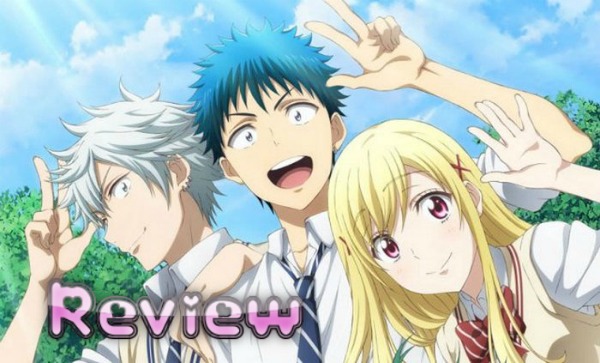 Some romantic anime spend an entire season just building up to a single kiss. Yamada-kun to 7-nin no Majo (Translation: Yamada-kun and the 7 Witches) opens with a kiss, and then builds the entire plot around more of them.

The story revolves around Ryu Yamada, a delinquent who just exudes selfishness and immaturity. He has a lousy time in school – he’s bored by the whole thing and gets lousy grades. To entertain himself one day, he sees honor student Urara Shiraishi, and decides to push past her on the stairs, I guess to show what a badass he is?

Yamada, stunned by Shiraishi’s sour expression, slips and falls down the stairs, taking Shiraishi down with him and knocking himself unconscious.

When he wakes up, he’s not quite himself.

Yamada and Shiraishi swapped bodies, and neither of them has any idea how. It also turns out that the introverted Shiraishi has been the victim of bullying, which Yamada sees firsthand from her perspective.

Yamada deals with the bullies in Shiraishi’s body, then catches back up with Shiraishi in his own body. After some experimenting with throwing themselves down the stairs, they find out that the body-swapping was caused by their lips touching as they fell – in other words, a kiss.

This covers the first episode, and sets up a situation in which the two of them agree to switch bodies to solve each other’s problems – Yamada asks Shiraishi (the honor student) to take a make-up test in his body, Shiraishi asks Yamada to deal with her stalkers in hers, that kind of thing.

This also gives both of them a chance to… explore.

Yamada comes to a revelation, and Shiraishi discovers the difference between boys and girls.

The two of them commandeer the unused former Supernatural Studies Club room in order to have a safe place to kiss (swap bodies) on school grounds, and inadvertently end up reviving the club, which draws new members. Naturally, the relationship between them grows.

After some time and experimentation, they discover that Shiraishi is the one with the body-swapping power, and that she is one of seven “witches” at the school with special powers enacted by a kiss.

Yamada is also special – he can “copy” any witch power (turning that power around on the witch herself) and use it indefinitely – until he kisses another witch. Using this, the main cast starts trying to find all the witches. Apparently the witches are like Dragon Balls – if you get all of them in one place, you’re granted a wish.

Of course, Shiraishi’s “swap” power is unique to her. The other witches all have different powers – charm, telepathy, and precognition among them – and the series is about both uncovering the witches and discovering what their powers are.

Eventually, kisses start getting thrown around everywhere, and for surprisingly practical purposes. And it’s not just between Yamada and Shiraishi – you get all kinds of configurations.

These are boys in girls’ bodies.

These are girls in boys’ bodies.

So yeah, this isn’t the type of series for you if you’re shy. Kissing happens a lot, and there isn’t much inhibition about who kisses who – it’s usually out of pragmatism. But surprisingly, this isn’t what I would consider a truly “ecchi” series. There are some moments of exhibitionism, but the series isn’t really about waiting for the next panty shot.

Really, what makes Yamada-kun a fun ride is the characters themselves, who avoid anime tropes and stereotypes at every turn. Every character has depth, and seeing the way they interact with one another (aside from the kissing) becomes the highlight of the series.

Also entertaining: Seeing the way they act AS one another.

Yamada-kun doesn’t feature a lot of fast action, and there isn’t a lot of art that will really blow you away. But since body-swapping comes into play so often, one of the great things about the animation is seeing the subtle ways body language changes as the characters switch around.