Yang is a 6-star unit that plays the Physical Attacker role. He’s got good stats and attacks set up nicely for his Monk theme but a real show stopper with his final skill.

Kick, Raging Fist, and All-Out Scuffle is his Monk theme attacks. Each of them deals good damage while two have a 25% and a 50% ignore to DEF.

Focus-Power gives him a 200% boost to ATK for the next normal attack giving his already good base attack a massive increase. This gives him a good utility move if he ever needs to throw a basic attack out.

W Martial Art is the skill that really sells Yang as a good character. It allows him to use all 3 of his Monk moves and Focus-Power twice in one turn.

Basically giving him two attacks in that one turn which is always good for an attacker character. Pair that with his Trait Bare Knuckle Extreme which gives a 200% ATK boost when unarmed.

Verdict: Overall, a really good attacker. W Martial Arts really makes bumps him up a couple notches so use it every chance available.

Yang is neutral to all elements and status ailments.

Yang can equip 2 weapons and 3 armor.

A monk who appears in the tales of a blue planet watched over by two moons. Yang is a man of dignity and honor, and a monk hailing from the kingdom of Fabul. He meets Cecil atop Mt. Hobs and learns that he is being persecuted by his motherland, convincing Yang to join forces with him in order to protect Fabul’s Crystal. Unfortunately, all of their fighting proves to be in vain and the Crystal is stolen regardless. Resolved to recover the stolen Crystal, his journey leads to an encounter with Leviathan that causes Rydia to fall from their ship. Yang then jumps into the water hoping to rescue her. 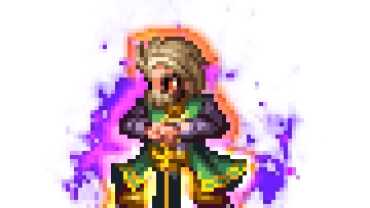