Yuna is a 6-star unit that plays the Summer, Healer, and Hybrid Attacker role. Her stats are very good for her roles and her HP is surprisingly good for the kind of squishy character she is.

Yuna is by all intents and purposes a magic user. Her main focus is gonna be using her magic and throwing out resistances, heals, and buffs most of the fight.

That isn’t to say she doesn’t have any damage capabilities. They’re just limited to two attacks Energy Ray and Energy Blast.

Both are pretty good moves, Energy Ray being a good small damage attack while Energy Blast is great for heavy damage. But dealing damage isn’t her purpose if we’re being honest, it’s helping the rest of the party do that for her.

Her ability to boost elemental resistance is great with all her Bar-spells. She has two Life spells, two healing spells, Esunga and Dispelga.

She is outfitted very nicely for being a great support unit above all. Her equipment isn’t special by any means but her trust master is actually pretty helpful so definitely level for that.

Yuna is neutral to all elements and status ailments.

Yuna can equip 3 weapons and 5 armor.

A young summoner who appears in the tales of another world where its people are trapped in a spiral of death. Yuna was raised by Wakka and Lulu since she was a girl, and has thus come to see them as her older siblings. Her father, High Summoner Braska, once defeated the undying evil entity known as Sin and inspired her to become a summoner as well. As fate would have it, she would eventually cross paths with Tidus, the son of Braska’s friend Jecht. With Tidus as part of her guardians during her pilgrimage to defeat Sin, they traveled together as their parents had done before them. 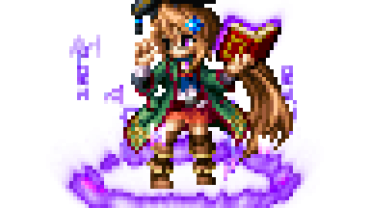