A big thanks to Scion Storm for all the information in the video above. 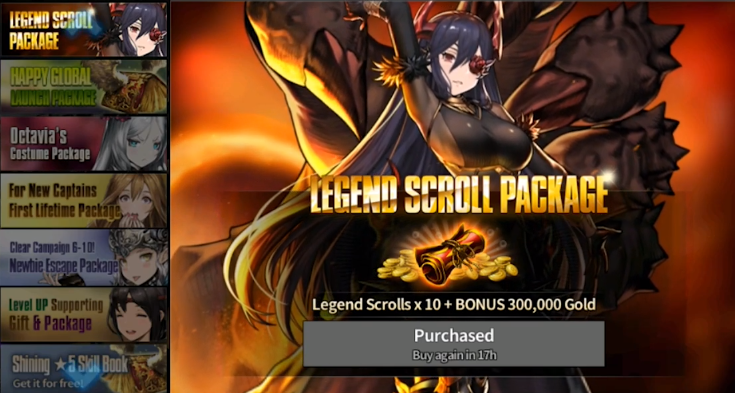 The very first thing we’re going to start off with is Re-Rolling. Re-Rolling is really easy in this game and can be done pretty early.

A lot of players like to play up to a certain stage in the game in order to get 1800 gems. With those, they can buy the Legend scrolls to summon for the better characters then re-Roll that way.

It’s probably better to do the normal re-roll because it takes less time. But you can do it this way if you so choose too but once you’ve gotten re-rolling done the next thing you’ll move to is gear. 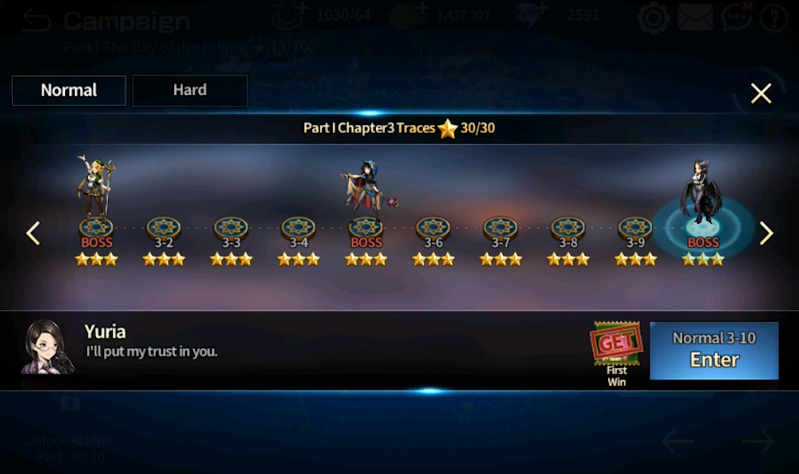 Gear for your character becomes important around the stage 3-10. Around this point, the game kinda starts telling you to gear up your characters and make them stronger.

At this point, you should focus on getting some runes for your characters. They should be available by now and getting the minimum of runes on your characters is a smart idea.

A good thing to do in this stage is using the Repeat Battles function. Set it up as much as you want but around 30 should be just fine.

Let your team go through this and they should be able to land three stars each win. If you end up losing a star, work on your team’s gear then get back to it.

Next up is about unlocking content which is done by leveling up your characters. Each time you level you unlock more you can do.

Leveling up is important not only because it increases their strength and usefulness but it makes it easier to get 3 stars on stages. Once you get into higher stages and start losing stars is when you need to go back to level up and rework gear. 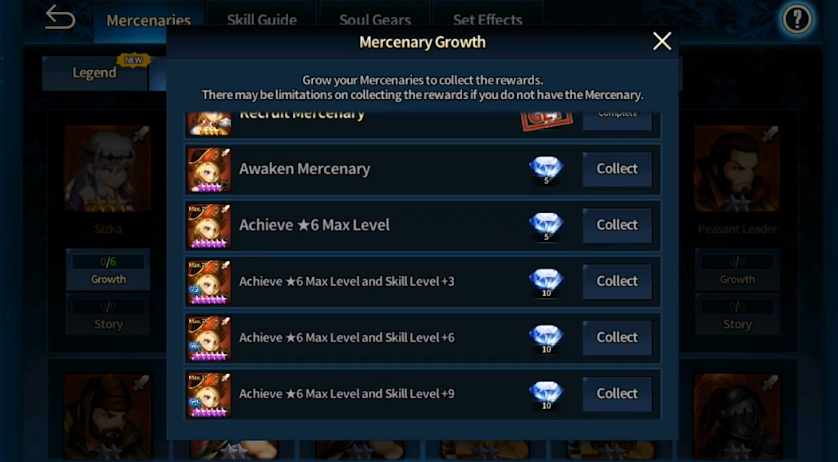 And when it comes to characters you should always keep all of your characters. In a lot of games you can get rid of characters and are kind of encouraged to but in this game, you want to keep them all.

The reason why is there’s a book in the game that shows you the characters you have and don’t have. Here you will see your growth with each character.

The more you level up a character the more rewards you unlock. You only get these rewards if you have the character so it’s better to keep them and profit.

Next up is going into the 5-stars. You can’t support 5-star characters if you are free to play or a casual player because there is no way you can upgrade around 8 5-stars by playing freely.

It looks good to have them but the resources required to maintain a lot of 5-stars is too much for anyone just playing casually. So you will have to use 4-star characters which are pretty good in this game.

My suggestion in this game is to use four 5-stars. That should be more than enough for you to use and be able to upgrade them all properly without any problems.

It’s much better to wait until around level 30 before you start focusing on getting more 5-stars. Up until then, it’s very hard to run a team that’s nothing but 5-stars because of the lack of resources to upgrade them. 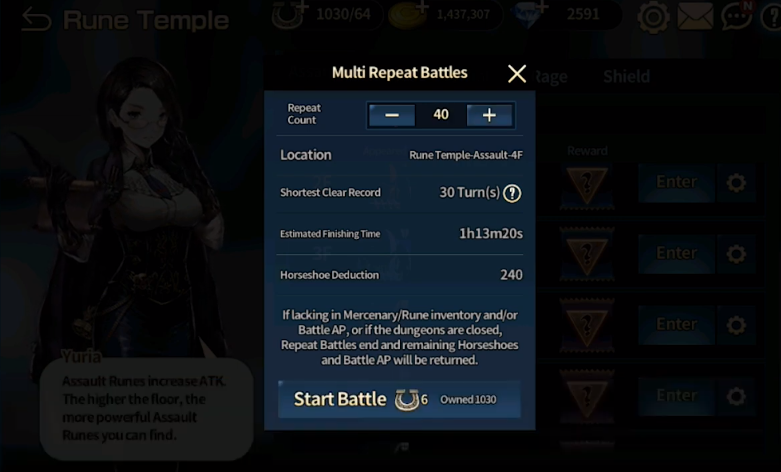 Take advantage of the auto-play as well. The auto-play in this game is great because you can set up a fixed number of matches with the Repeat Battle system and throw it into auto-battle.

It’ll do the auto-battles in the background in that mode and you can continue playing the game. You can set up a challenge stage on auto-battle then go play PvP until it’s finished.

The next thing is managing your currency and not over summoning. You don’t wanna blow all your currency on summons every time you have enough to do one. 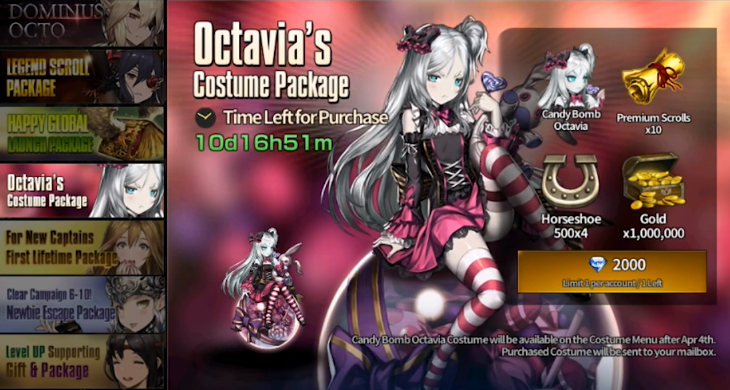 It’s best to save up to around 1800 so you can get your Legends before anything else. After that, you can easily get enough to sustain yourself on the normal summons to get yourself silver characters.

Using your currency to fast can hurt you in the long run. Summons are important but you don’t wanna burn out every bit of currency you have.

Most things in this game can be bought so having some currency left over is good for this. There are special packs you can buy that maybe give you gems or a character skin with bonus items.

You can use your currency to benefit from these as well as doing your normal summons. If you spend too much on summons you can miss out on some pretty neat things in the game.

And yes, it is important to summon to get characters. One reason is because of some characters needing characters in order to rank them up. 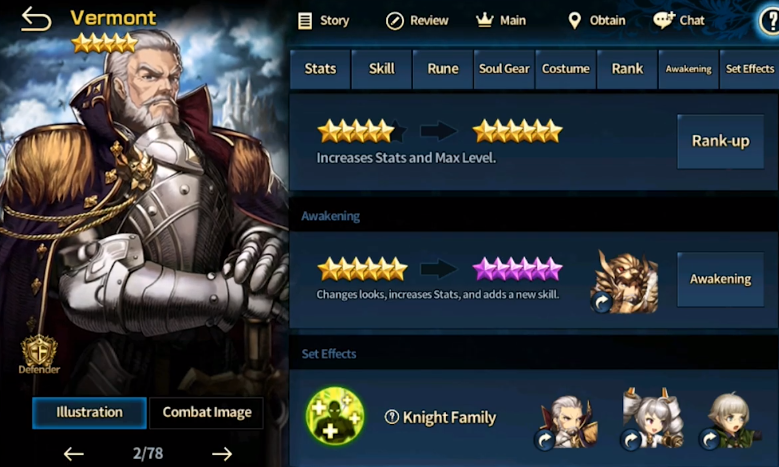 Vermont is a character who needs five 5-stars in order to awaken him. So it can take a lot to get some characters to the next star rank.

The next thing to talk about is taking advantage of the days. During the week, there are different days you can get different rewards for playing on. 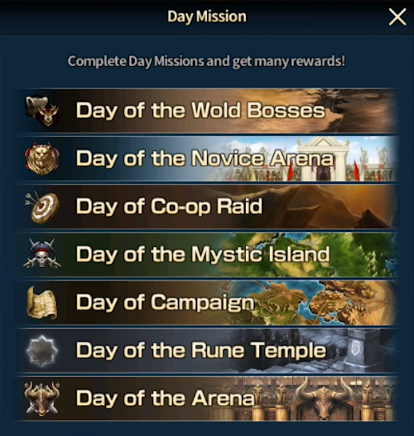 There is a Day of World Bosses, The Novice Arena, Co-Op Raid, Mystic Island, Campaign, The Rune Temple, and the Arena. Doing any of these modes on the day they’re specified will get you more rewards than you get normally while playing them.

So you definitely want to take advantage of these days and benefit from the bonus rewards you can get. Also, pay close attention to your runes.

Runes are important in this game because they’re essentially your gear. And depending on what character you have you wanna make sure you have really good gear. 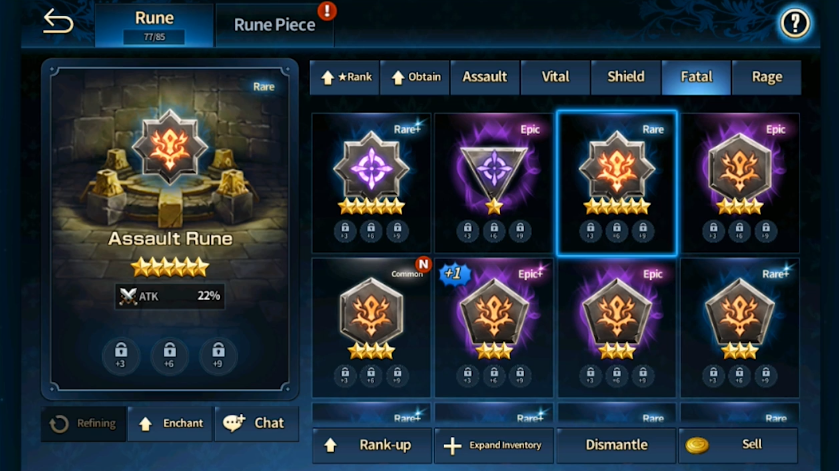 There are certain packages in this game you can buy with your currency that give you good Runes. But some are locked to certain star ranks so only some can be used for 5-star or 6-star characters.

Runes allow you to build your characters differently based on their stat buffs. You can take a Tank character and build them up with Defense or with Health based on your play style.

When you upgrade your runes you’ll eventually reach a ranking system where you can re-roll the ranking of your runes. It costs gold to do this re-roll but it pays off in the long run if you can get an S on your rune. 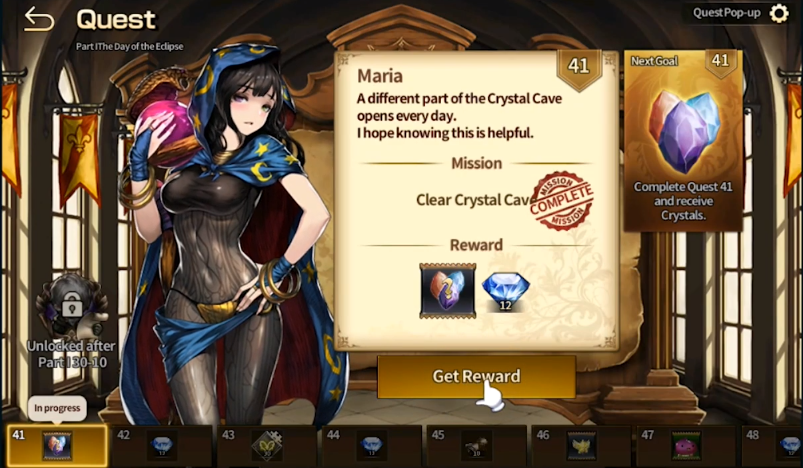 Next is doing all your quests. The quests are special objectives you can do that grant you rewards by doing simple things.

Playing through the story, awakening characters, playing challenges, etc. And each one gives you rewards and its a good method of getting some currency.

So be sure to pay attention to your quests and collect the rewards they give when you finish them. They really pay off in the end.