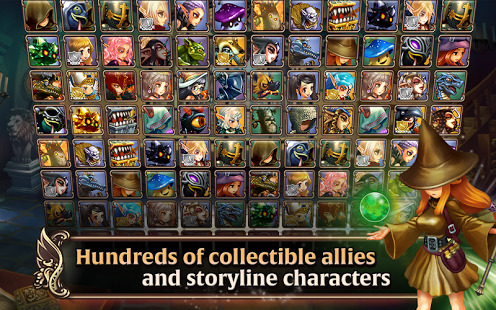 Welcome to the Dragon Blaze Guide. In this post I will be providing useful tips and strategy to help you progress in the game.

There are currently 5 characters available that you can choose as your main character. Keep in mind main characters get to wear all gears. Unlike allies, they only get 3 choices, which is weapons, shields or orbs and armor. We will get to that in the items section.

Warrior -> Your classic tank fighter. You don’t always have to build him tanky but it is highly advised to do so. Here is a rough guideline on what you need:

Skil 1: Rage Rush – Uses Rage to launch a powerful attack. The ATK of Rage Rush is proportional to the Rage used.

Just keep adding skills until you get to the recommended number of points below.

Rogue – Your standard melee single DPS character. If you like to see big criticals and high damage, pick this guy. He cannot wear a shield but he can wield 2 swords or daggers. He is also a strong pick for Arena PvP.

Skill 1: Hidden Blades – Dashes towards the enemy like lightning to unveil Hidden Blades. The enemy will be unable to use skills temporarily. Increases Vigor by 2 points.

Skill 2: Dance of Death – Unleashes Vigor that was accumulated through normal attacks and Hidden Blades. Increases ATK Speed and ATK.

Skill 3: Vanish – Blends in with the outside world to hide. Critical Rate and DEF Penetration increases while in Vanish state.

Since getting a good priest is mostly RNG, this is the build I recommend.

Mage – Big AoE damage but fragile. They shine late game but is a little weak early.

Skill 1: Flame Burst: The single damage skill of the mage class. The first of the skill points that you should add as you move through Normal and Hero mode.

Skill 2: Meteor Invocation: The AoE damage skill of the mage class. You should generally use it for end game setups. With great gears, your powerful spell can quickly wipe out entire enemy team.

Ultimate: Inflict 653% damage on all enemies. Additional 16% damage for 16 seconds.

Skill 3: Salamander’s Curse: The debuff skill that turns enemies into sheep or lambs while dealing minor damage. The cursed enemy cannot attack and they suffer a decrease in defense.

Ultimate: Inflict 551% damage, transforms into a lamb and decreases DEF by 65%. Transforms surrounding enemies into lambs for 16.6 sec (30% chance)

Fire Seal: Detonates fire seal on an enemy. It boosts damage of Flame Burst and Meteor Invocation. Although this skill sounds like it adds alot of damage, you are better off putting 1 point into as a final build.

Intelligence Increase: Increase Int by a percentage based on level. Int is a main stat for Dragon Blaze mage, so it is a decent passive to have.

Weapon Use: Increase max Weapon ATK by a percentage based on level. A great skill as a mage to have weapon use, it is especially important as you move into end game gears with the strongest weapon possible in the game.

Flame Study: Inflicts Fire Damage Equal to 10% of base ATK. Fire Damage itself is relatively weak. You should only place 1 point max into this passive.

Archer – Your physical ranged character that can do a lot of damage. I always hate scenarios where there is a lot of them. They hurt! They are quite similar to the Rogue, so it comes down to preference.