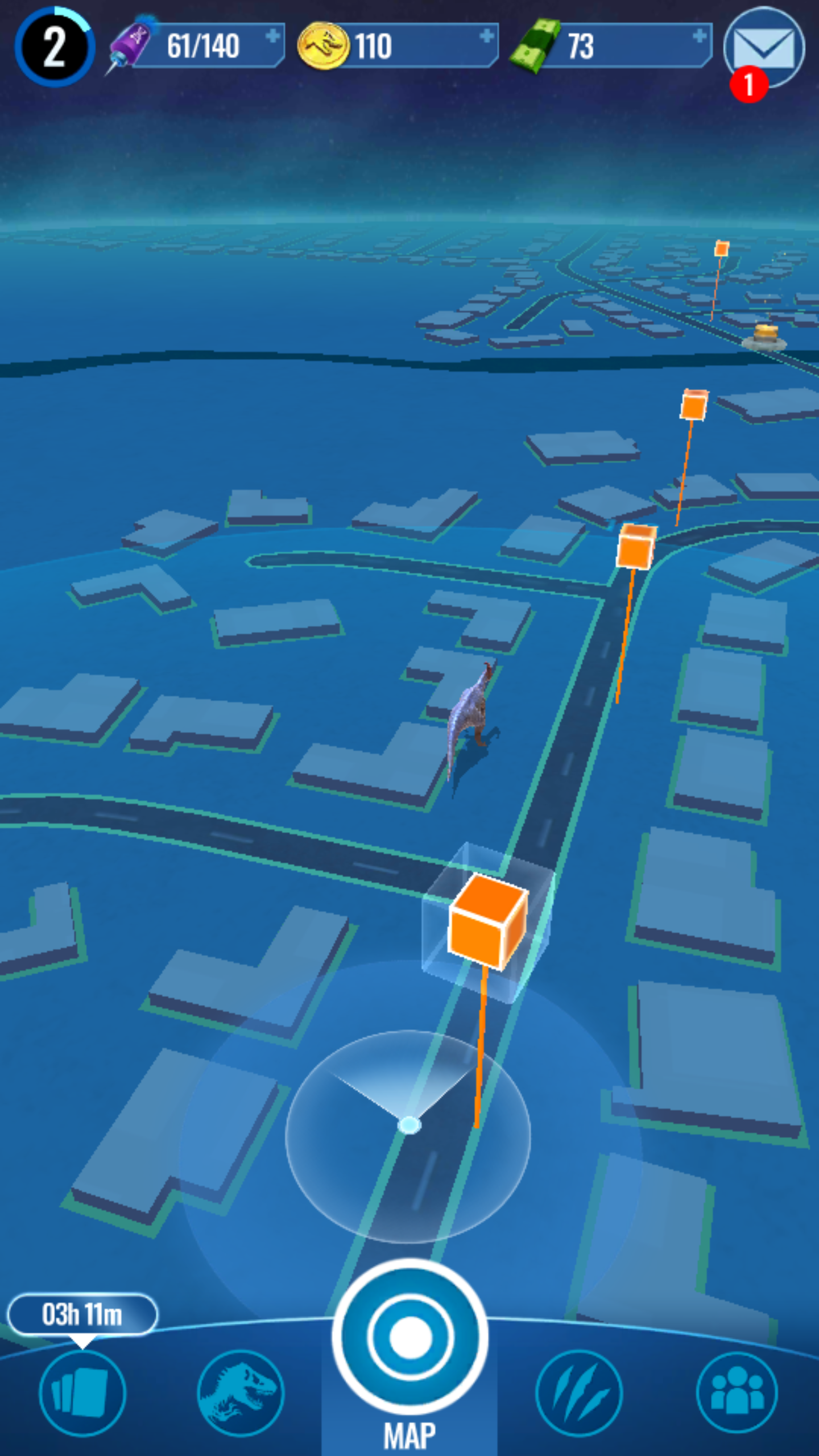 Jurassic World: Alive is an AR mobile game where you physically go out into the real world to capture dinosaurs for your Jurassic World park. It’s the same engine and mechanics as games like Pokemon Go so anyone who’s played that should find it familiar.

The point of the game is to capture dinosaurs as they pop up on the map. You have to actually walk around in the real world and go to different areas in order to find new dinosaurs.

When you find a dinosaur you can tap on it to see what kind it is, then you can launch a drone to go after it. This is how you capture dinosaurs and it’s an interesting mechanic. 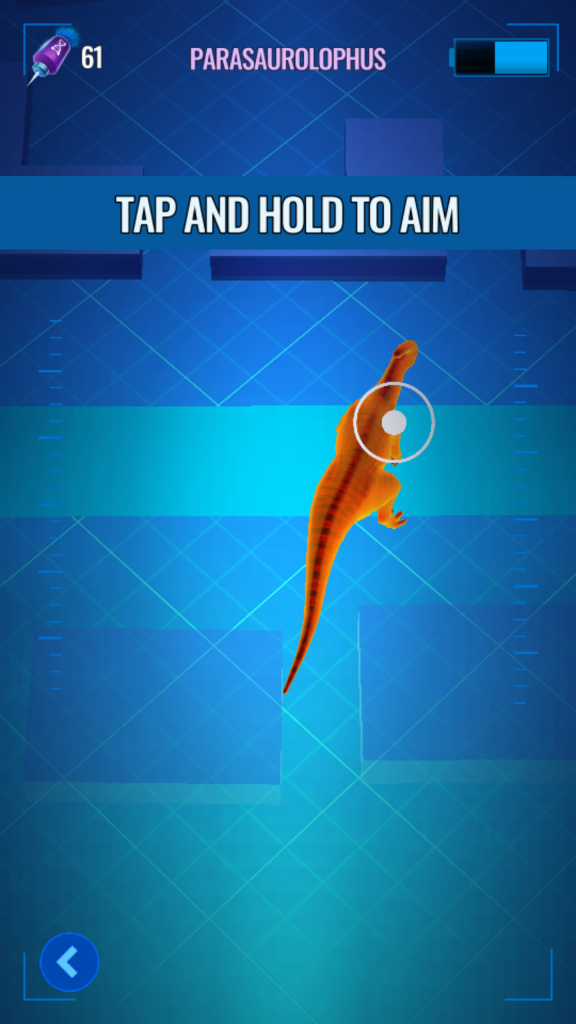 When you launch a drone you’ll go into a top-down view seeing the dinosaur as a target appears on it. You can then tap and hold the screen to create crosshairs.

When you release the screen your drone will fire a dart. The goal is to hit the target on the dinosaur in order to extract DNA from it. The targets that appear on the dinosaurs are one big circle with a smaller circle in the middle. You wanna hit the smaller circles because they give more DNA when hit.

These segments are timed so you can only get so much DNA from one dinosaur. Most of them cost 50 DNA in order to initially unlock so you want to try your best to hit the mark the first try.

Darts are also limited and as you use them you’ll have to get more through rewards or buying them. So be sure to watch your aim and not waste too many of them.

Once you capture your dinosaur you can unlock them in your collection. Once unlocked they can be viewed and upgraded and also be used in the games battle mode. 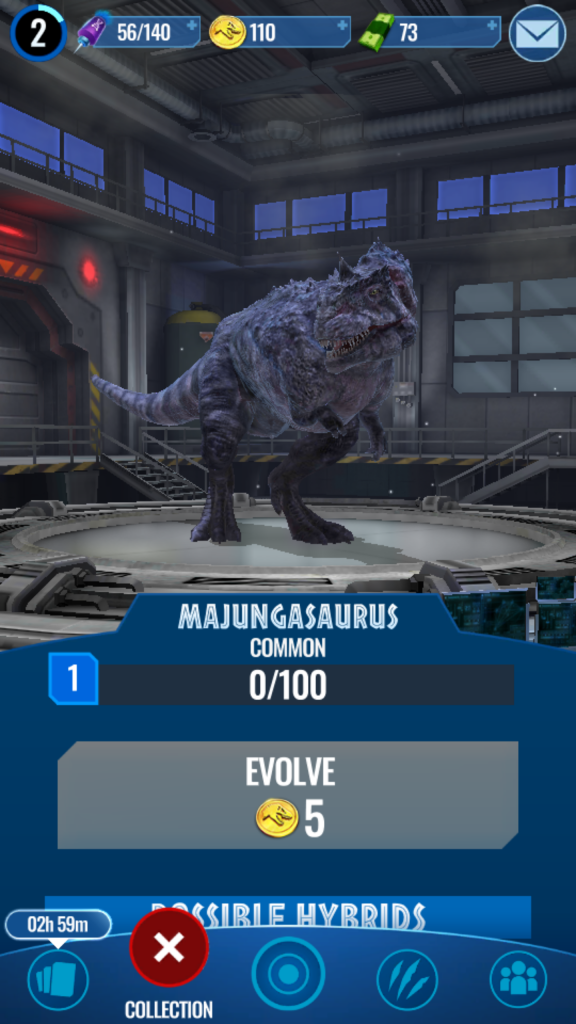 Battle mode is unlocked after you collect four different types of dinosaurs. In battle mode, you can use your dinosaurs to fight other dinosaurs in order to gain points and rewards.

This is the mode you’ll be prepping your dinosaurs for during most of the game. The mechanics are very simple following a pretty standard turn-based combat system. 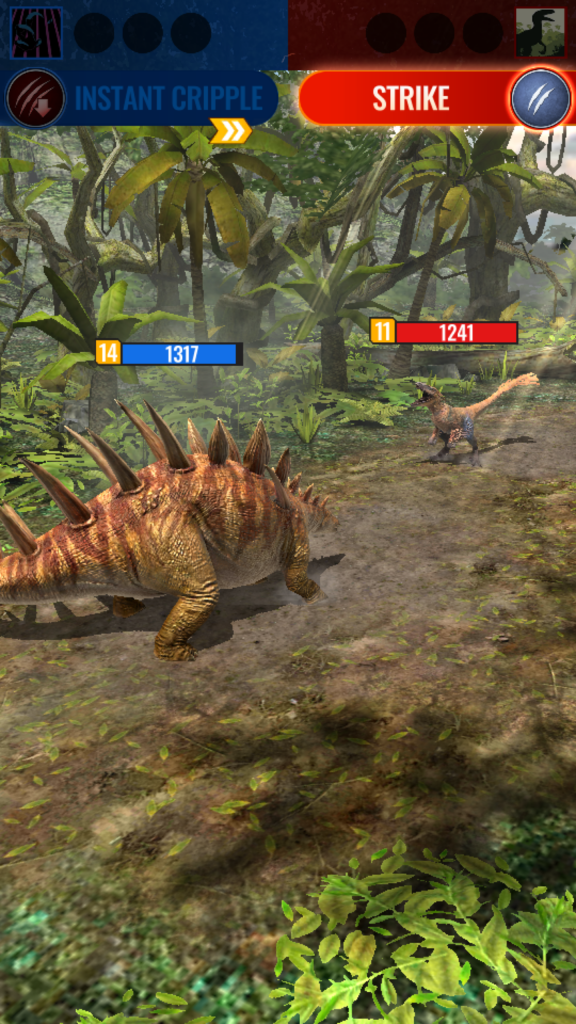 Each dinosaur has their own move set, typically a basic attack and a special attack. Basic attacks are the dinosaurs Strike, it does damage and some dinosaurs have a chance to inflict some sort of side effect.

Whereas the special moves are much stronger and can have a variety of side effects, most often stunning is what seems to trigger.

Battling is simple and easy to understand but as you get better the fights are going to get a lot harder. So you’ll want to enhance your dinosaurs as much as possible.

To do this you’ll have to gain more DNA of the same dinosaur type in order to upgrade it. There is a lot of exploration required in this game, and I mean that literally since you’ll be out walking in the real world. Another way to enhance your dinosaurs is by fusing them with others to create hybrids. This is a mechanic that requires two compatible dinosaurs that can make a hybrid one.

When you create a hybrid they are much stronger and better for battles. But they’re difficult to get because of having to have specific dinosaurs for them.

So making hybrids will take some time by trying to find the right dinosaurs. But when you make them they are 100% worth the effort.

In the video above there are some helpful tips for the game and goes over the supply drops and spawn rates of the dinosaurs in the game. These are important because supply drops replenish your darts and give you money and the spawn rates determine what dinosaurs will appear near you.

As for some other helpful tips, you want to do any and all achievements you’re able to accomplish. They are tasks that you can complete in order to gain rewards for them.

The rewards can range from a variety of things and all of them are useful in the game. The more you do the better your rewards will get as you obtain them.

When you move it across the screen it’ll seem sluggish and sometimes it can be hard to line up the crosshair with the targets as the dinosaur moves. A good way to work on aiming for this is to try to get the crosshair ahead of the target instead of directly on it.

In most cases, if you aim where the dinosaur is gonna be walking the center of the target will move right in front of your dart. It makes it a lot easier to get direct hits and extract more DNA from dinosaurs this way.