FMA: Brotherhood is an awesome action anime that I have watched since Claymore. I enjoy the series a lot and here are my top 10 picks for the strongest characters in the show. I know not everyone will agree with this list, so feel free to leave a comment on your top 10! Scar embarked on a revenge mission after sustaining a heavy injury during Ishvalan Civil War. He survived the war and targeted to kill State Alchemist. To disguise himself and achieve his mission of killing State Alchemists, Scar wears sunglasses. This is to hide his distinctive trademarks of an Ishvalan; red-eyed and dark skinned. He proved his formidable abilities and combat skills when he killed 10 State Alchemists. Later in the series, he was able to defeat and cause a severe injury to King Bradley. She is the trusted and loyal female bodyguard of the prince of the Yao Clan of the Xing Empire. Lan boasts of a set of skills like hand-to-hand combats and explosives. Together with her grandfather Fu, Lan Fan was occasionally seen shadowing Ling Yao. This is to make sure that Ling doesn’t cause troubles. In Episode 3, the “Girl on the Battlefield”, Lan Fan showcases her battlefield resourcefulness when he and Ling Yao managed to escape King Bradley. She severed her arm to create a decoy that misled the King. In episode 47, “Emissary of Darkness”, she uses a blade-arm automail to lacerate Gluttony severely. Olivier Mira Armstrong is a family member of Armstrong family who was put in charge of the northern border of Fort Briggs. Due to her firm and a strong sense of leadership and command, she earned the title of “Ice Queen” or “Northern Wall of Briggs”. She is known for her cold demeanor towards her enemies and believes in the “survival of the fittest”. She doesn’t tolerate anyone who can’t live up to her standards. In episode 45, “The Promised Day”, Olivier requested her father, Philip Gargantos Armstrong, to retire and leave the country. She also asked him to allow her to inherit the family, instead of her brother, Alex Armstrong. The father then proposed a duel between the two and the winner shall inherit the family. Despite Alex’s muscular body, Olivier won over him. Despite having her internal organs removed for the sake of her baby, Izumi is a well skilled and praise worth alchemist. Due to the organ transplant, she is frequently seen vomiting blood. She had both protagonists Alphonse Elric and Edward begging for her apprenticeship. Throughout the series, Izumi Curtis is referred to as the mysterious woman who attacked the Briggs Patrol units and escaped with their food supply. This was when she was sent for training in the northern Briggs mountain region. She usually introduces herself as the only passing housewife though in episode 54, “Beyond the Inferno”, Izumi introduced herself as an alchemist. This was when she came to central for participation in a coup d’état. He is the 12th prince of the Yao Clan of Xing nation. Driven by the hopes of becoming the emperor of Xing, Ling Yao traveled to Amestris to obtain the philosopher’s stone. He later obtained the philosopher’s stone from which he obtained Greed that granted him the power of ultimate shield. The power of ultimate shield was capable of covering his body with the highest density carbon hence making him indestructible. Ling is expertized in swordsmanship and has an incredible strength that enabled him to fend off King Bradley. In episode 23, the “Girl on the Battlefield”, he disabled Gluttony using a single hand and lifted him up to demonstrate his strength. Also known as Colonel Mustang, Roy is a state Alchemist who was mentored by Riza’s father, Berthold Hawkeye. After the mentorship, he mastered the arts of Flame Alchemy and that’s why he is also called the “Flame Alchemist”. His special white gloves act as flint whenever he snaps his fingers and creates a flame. After learning of his best friend’s death, Maes Hughes, Roy Mustang becomes determined to reveal the truth behind the death. He was able to burn Lust to death in episode 19, the “Death of the Undying”. In Episode 53, “Flame of Vengeance”, he learnt that that Envy was responsible for Maes death. He defeated Envy and depleted his philosopher’s stone and reverted him back to parasitic form. He is the first and eldest Homunculus created by Father. Though he is aged, Pride takes the appearance of King Bradley’s son, Selim Bradley. The ‘Dwarf in the Flask’ granted him power over shadows and he can manipulate them to decapitate his enemies. However, he is can’t use his powers in total darkness because of the absence of shadows. He is capable of devouring others to gain their physical traits and this is shown in Episode 48,” The oath in the tunnel” when he consumed Gluttony to gain his replenish his philosopher’s stone and gain Gluttony’s acute sense of smell. 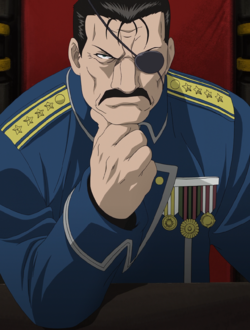 Also known as Führer of Amestris, Bradley began as a potential candidate aspiring to succeed Führer. After intense and extreme training, he emerged as one of the strongest characters in the anime due to his exceptional swordsmanship skills. King Bradley wields the powers of the Homunculus though he ages like a normal human being. He wears an eye patch to conceal his Ultimate Eye, which is the secret to his unique abilities. If unleashed, his Ultimate Eye can grant him the power of dodging any incoming attacks and this is clearly shown in Episode 56,”The Return of Führer” when he was able to dodge through incoming bullets. You can also refer to him as the mysterious father of Alphonse Elric and Edward, both of whom were strong protagonists. In his early days, Hohenheim was referred as “slave no.23” of a popular alchemist in Xerxes. He was given the name ‘Van Hohenheim’ by Homunculus who taught him about alchemy. After tricking the king of Xerxes and sacrificed the whole country, Homunculus created an eternal life for himself and for Hohenheim. This is why ‘dwarf in the flask’ resembled Hohenheim. Also referred to as the “Dwarf in the Flask”, Father is the main antagonist in the Fullmetal Alchemist Series. He had the powers of more than half a million souls and was able to create seven more Homunculus; Lust, sloth, Wrath, Envy, Greed, Gluttony and Pride. Homunculus took the paternal figure as a “Father” and managed to recreate the sun easily at the palm of his hands. Dwarf in the Flask escaped from a glass prison after he sacrificed the entire country of Xerxes. He took in the form the form of human resembling Hohenheim.