All information and details are thanks to Kollio Gaming’s video. 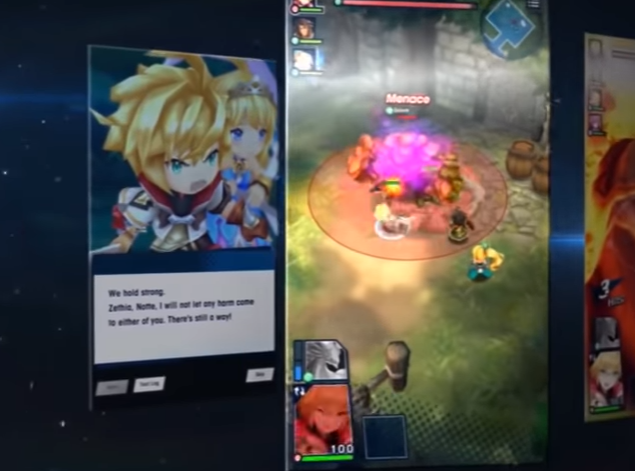 So the first place we’re starting is in the story of the game. A lot of people talked about how the story behind this game is very generic but it’s actually kind of cool.

They recently came out with a story video talking about the game and explaining some of the story aspects. As the main character, you’re betrayed by your family and have to fight them to take back the throne. So here we have a good glimpse at what the U.I is going to look like. So at the top, you have your level, and it looks like the Dragonblood Prince Euden is the lead character at the moment.

And the first thing you see is the dragon trials which is some kind of special event. And there will probably be many of these in the game.

In the top right you’ll see the different currency types. Both in-game and premium currency as well as the game’s version of “Stamina”.

Next, you’ll also see there is a join co-op section. Most likely you’ll probably be able to see rooms you can join or any friends you have listed and maybe PvP.

Below that is the Quests. There’s most likely going to be daily, weekly, monthly, etc. The starter quests are probably going to be there as well.

Above the events is what I believe is the notifications. And possibly a notice board where news and updates will be posted.

At the bottoms are several different tabs that take you to different sections of the game. Your team screen, castle settings, etc. 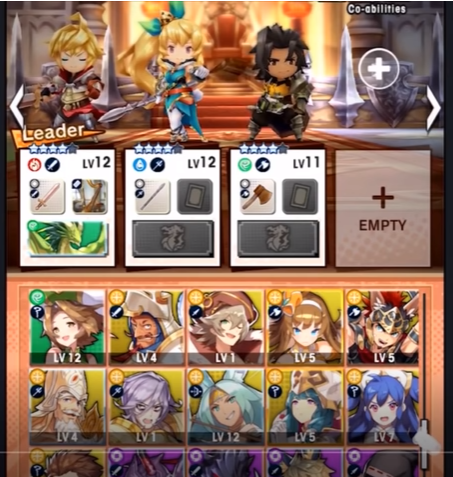 Here you can see a good example of how many heroes are going to be in the game. It looks like each hero has their own set equipment that most likely can’t be changed.

It also shows the star ranking, the kinds of dragons equipped with the hero, and much more. And on the sides are two arrows which probably allow you to cycle through different teams that you have. 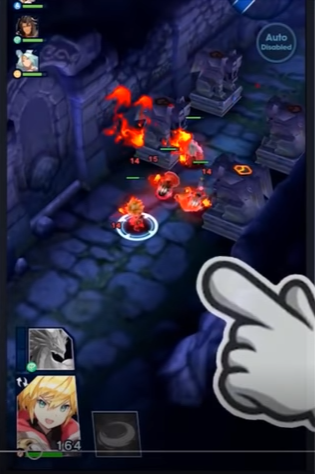 So what this screen shows are a few important things. It show’s a dragon icon above your character’s head and shows skills next to them.

At the moment we know you can have up to two skills at the start. And it also shows that there is an Auto function in the game as well.

There also seem to be terrain hazards such as element hazards or traps on the map. It’d be nice if each of the levels is randomized when you go through it but there’s no word on that yet. 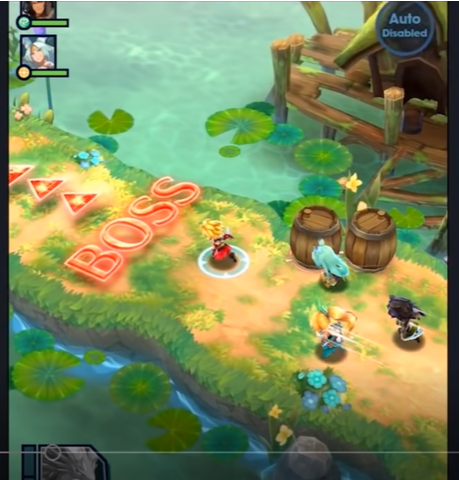 On the map, you’ll see things like wooden barrels. It’s not shown in the video but I believe you can run up and hit them to get items and drops from them.

As no surprise, the boss shown has two different kinds of moves. An AoE attack and a charge attack which is pretty run of the mill for bosses but it shows that with Bosses there will be variety in their fights. 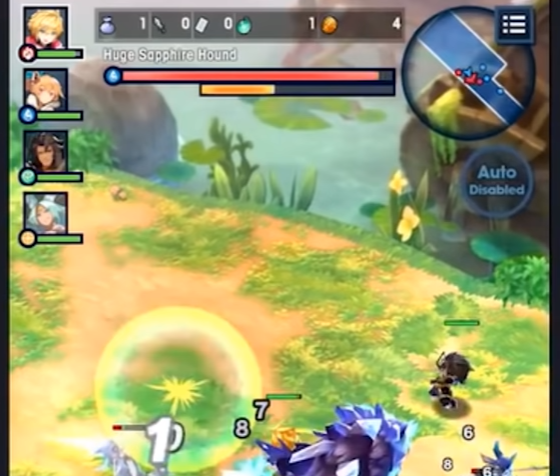 Above the health bars of the boss and enemies, it shows several different little icons with numbers by them. These keep track of drops you get throughout the stage and the number shows how much you’ve gotten through that stage.

Next are crystals you can obtain in the game called Dragon Obelisks. You can collect crystals from enemies and Obelisks and it will fill the meters with the dragon icon.

In theory, by getting all these crystals you can upgrade your dragon or maybe get more uses for it. We won’t know for sure until the game is released.

There isn’t much known about the dragons you can get in the game. So far we’ve seen five from the footage they’ve shown but there may be more. 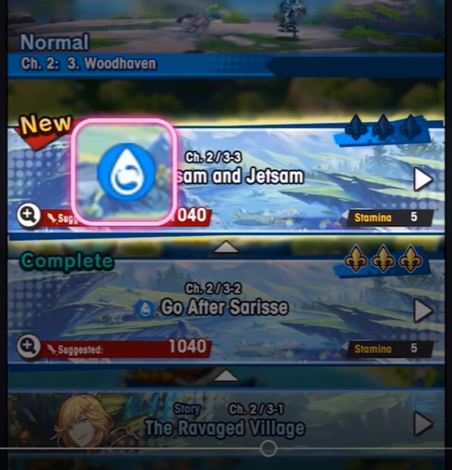 Each of the levels has a certain amount of stamina it costs for you to enter the area. It also has a sword icon with the word “Suggested” by it and this refers to the power of your party.

It also has a rating system to allow you to see how you’ve done in levels you’ve beaten. It’s pretty standard level selection for RPG mobile games.

The next thing to talk about is the party mechanic in the game. When you have a party you have Co-Abilities which are passives you get by having certain characters together. 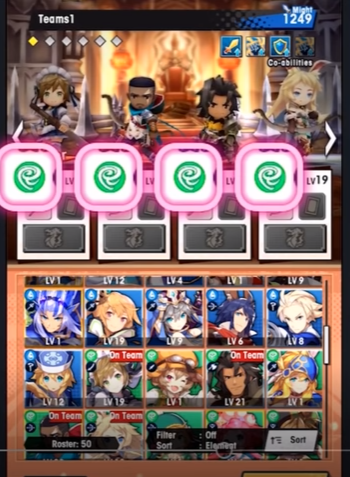 So having a good team comp and knowing what characters are tied to each other is helpful. We don’t know much about Co-Abilities yet but there’s more news to come.

As mentioned before you can obtain weapons by playing through levels. You can also get Rupees which is the in-game currency, as well as obtaining mana which you will use to upgrade your mana circle. 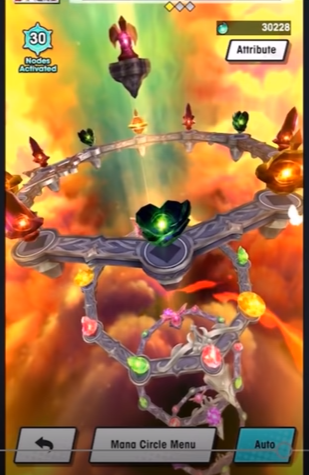 In the mana circle, there are a lot of nodes that you’ll unlock to upgrade it. And to do so you’ll use mana points to unlock each node.

Now, there’s no confirmation on how to progress through the circle. Whether it be by reaching levels or unlocking all nodes, but going up the mana tower is something we’ll learn when we get the game. Here is the next part where it talks about building structures like mines to obtain currency. Looking at it seems to show a simulation section of the game where you can build mines, a storehouse, an egg incubation place where you can have dragon eggs. 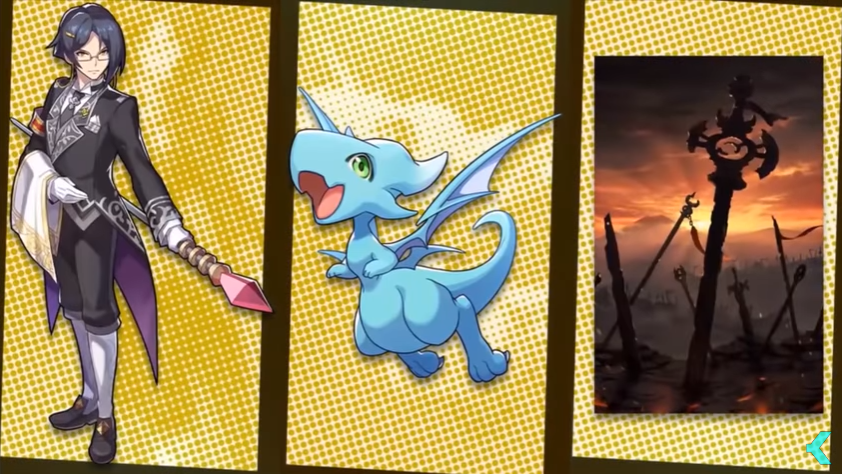 Throughout the game, you unlock several different characters like most gatcha games. You can also get Baby Dragons which is your method of getting dragons, which you can also get some other creatures it seems like instead of just exclusively dragons but that’s just speculation.

Speaking of gatcha, there is a gatcha system where you have character banners. The banners show the main character you can obtain by pulling characters. 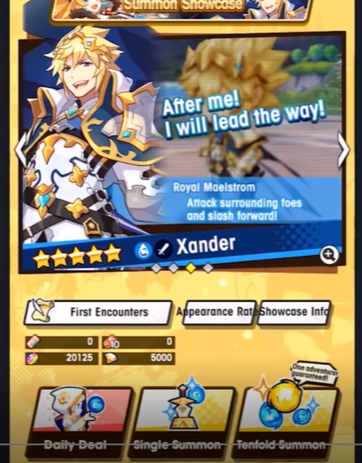 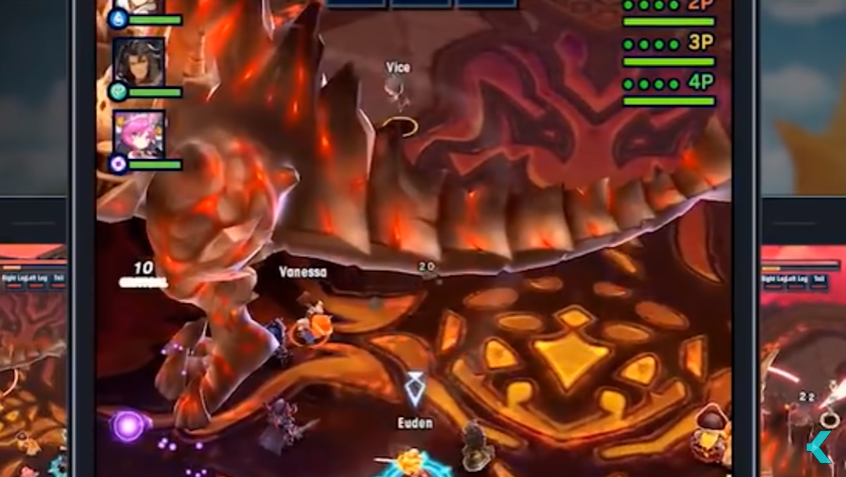 At the end of the video, it shows a bit of multiplayer where you seem to be fighting bosses. It seems like you may be fighting different parts of the monster’s body.

There is a lot to look forward to with this game. I hope everyone has a good time playing it when it releases in the US September 27th 2018.