As you advance later on in arena 4+, getting 3 crown wins are harder as most people know how to defend or counter attack. A majority of the players will try to go for the 1 crown win. In this article, I will share with you some good strategies to go for the 3 crown win.

Deck is inspired by Spencer 23$.

This is the main mechanic behind getting the 3 crown win. You want a big push on one side. You want to drop a few slow units such as the Giant/Archers/Witch/Knight/Bomber on a lane when you reach 10 elixir. When they reach the bridge, you drop more units and start a strong push. This great for getting you to arena 4, as most players aren’t expecting strong pushes like that.

Scenario A – Opponent Attacks Other Side

Should your opponent choose to attack the other side, you want to ignore it and pile on more pressure on the lane you choose. It is risky but if you want 3 crown wins, you should just go for it. You literally disregard defending your other tower. Keep adding more units as long as your Knight or Giant is still alive.

Scenario B – Opponent Chooses to Defend

Depending on what units they use to defend, you should try to Fireball medium sized units such as Musketeer, Barbarians or Knight. Against small troops, use Arrows to get rid of their defence. If your Giant is able to survive a defense and get to the tower with 1/2 health, keep on piling either the Witch, Archers or a Knight to keep the siege going. Should your ranged troops die, then, you should stop the siege and wait for another assault.

If they have Inferno Tower, your Giant isn’t going to last very long. In that case, you want to deploy Archers and Witch to try and take it down. Giants are okay against Tesla and Bomb Tower, as long as you have ranged troops like Bomber/Witch/Musketeer/Archers backing it up. 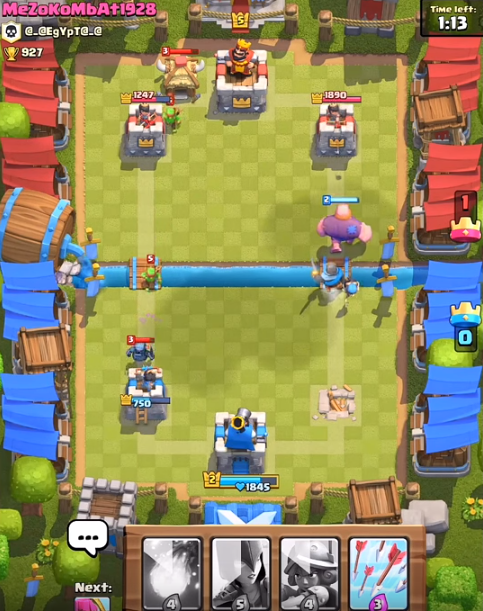 This push costs about 12 elixir and is a great starter push. You start by dropping the Giant on a lane. Once it reaches the Bridge, drop your Knight and Musketeer. Save your Fireball and Arrows for potential defending troops. This push is weak against Skeleton Army and Minion Horde. Get your Arrows ready for this. Alternatively, you can use a bomber if they have Barbarians.

This is also a great push at the cost of 14 elixir. Keep in mind you won’t be able to have enough elixir for Arrows or Fireball once you launch it unless you are on

Big Threats against This Deck

Should your opponent drop this unit on the opposite lane, you have see if they are going to drop other units like Hog Rider or Musketeer to back it up. If they do a big wave push with it, you could be in trouble as the prince rush with backup troops is faster than your Giant rush.

The Hog Rider can ruin your day if you choose to ignore the opposite lane. If your opponent has Freeze spell, your towers will get wrecked.

This will ruin your push if they manage to freeze your entire troop while attacking.

A Double Balloon rush will also ruin your day!

This deck’s playstyle is go big or go home. You can’t be wishy washy about it and not commit to a push when you got the upper hand. You also have to be willing to give up your opposite tower. It suits people that like to play a troop rush deck.