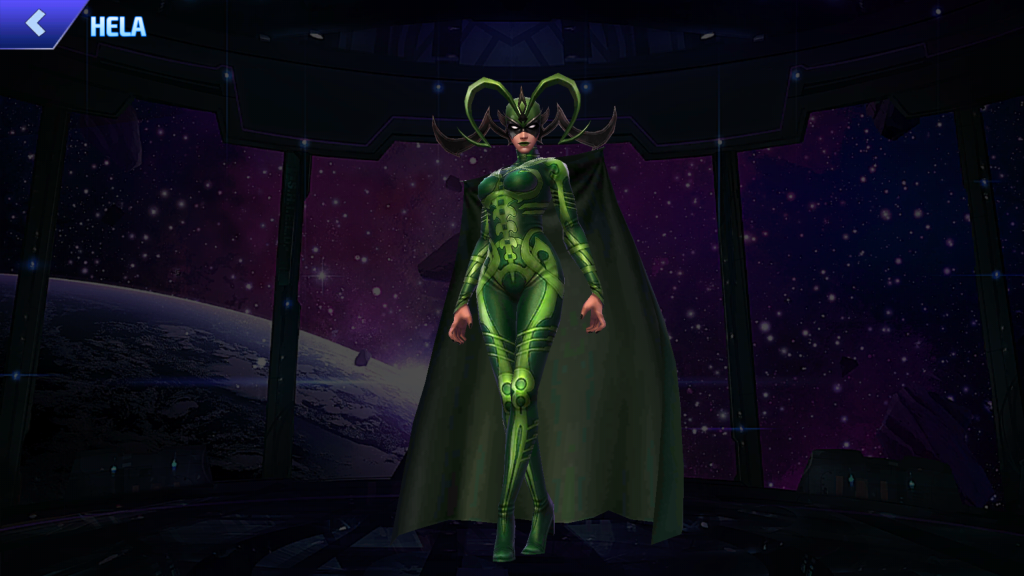 Hela is one of the newer heroes added in the new Odin world boss update. Hela is a Universal hero giving her a great range of usability.

She originates from Norse Mythology and first appeared in the Thor comics. Hela rules the domain of death for those who died outside of battle. She is also one of the children to Loki. 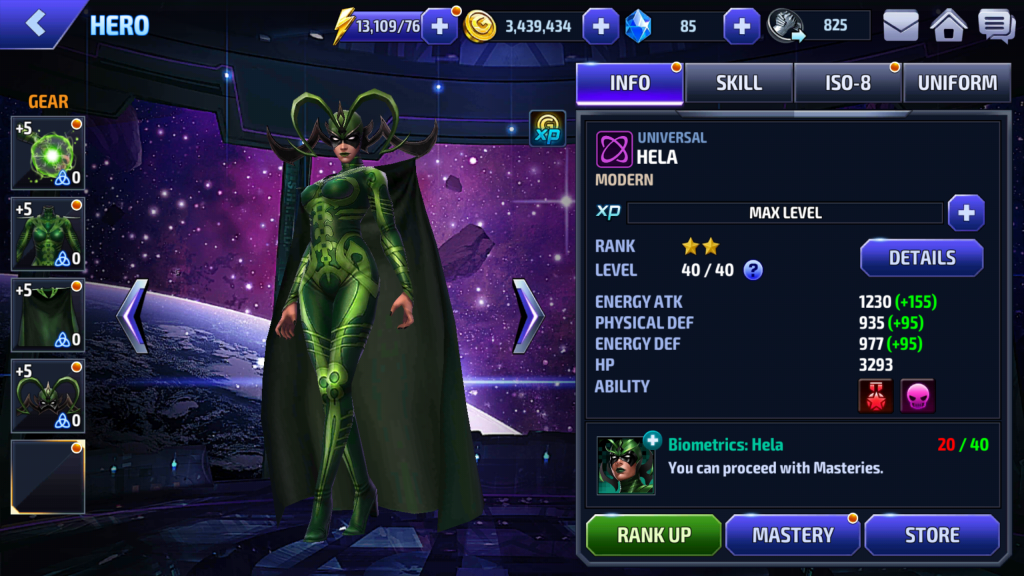 Hela is a rather decent Universal character hailing her best stat in her HP. The higher in level she gets her stats prioritize most in her HP and Energy Attack.

Due to her stats her usefulness is going to lie within her skills and being a party character instead of a leader. Unless you’re running a team of nothing but energy attackers, then Hela’s leadership skill will do you wonders. 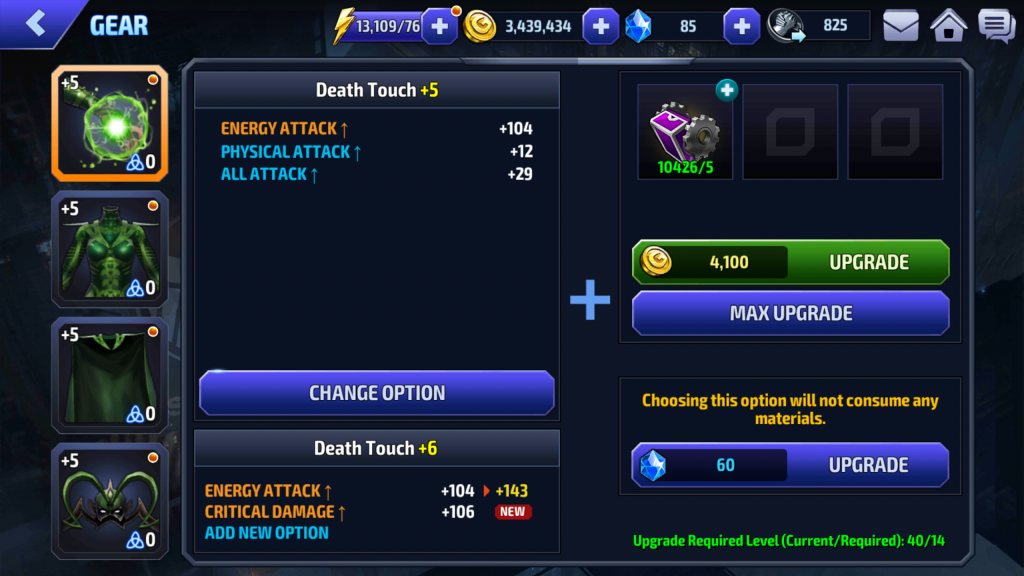 Like all heroes Hela has four pieces of base gear that you can upgrade and enhance through out the game. Each piece of gear gives their own unique bonus to Hela’s stats but we’re going to focus on the main stats each piece focuses on

The higher her gear is leveled the more stat bonus’s it gives. Each gear focuses on a few main bonus’s then a handful of lesser ones. 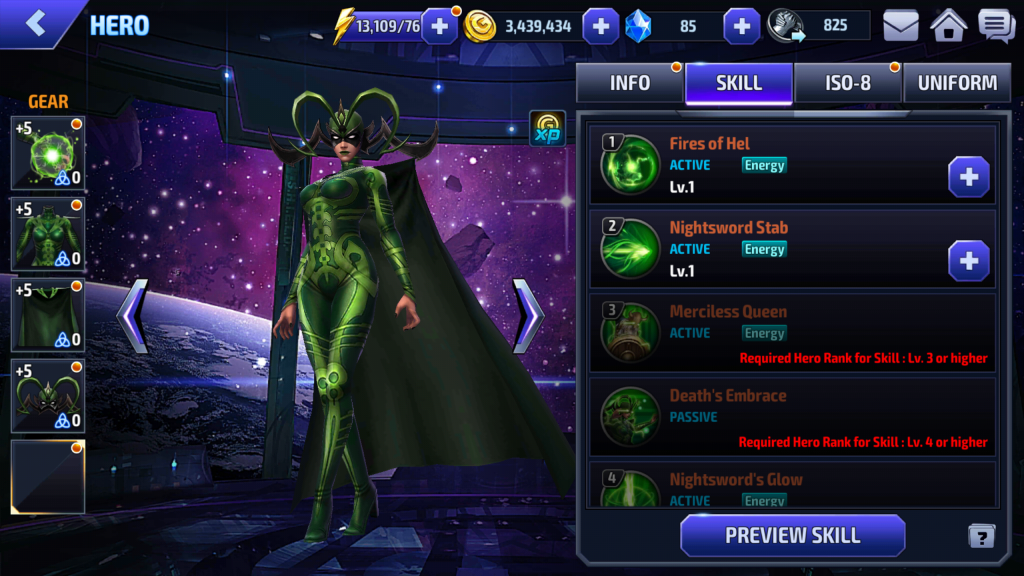 Hela’s battle style plays mostly off her energy attack and being a ranged character. All of her skills are in some way based on her range.

The higher level each skill gets the wider range of power it’s going to have. Like most heroes, Hela has 5 Active skills, two Passives, and one Leadership. 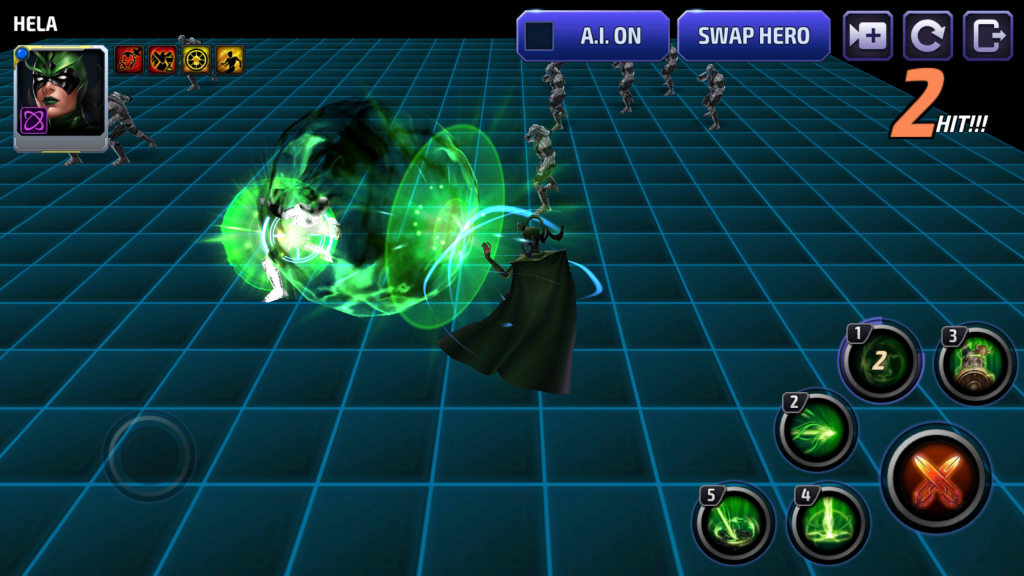 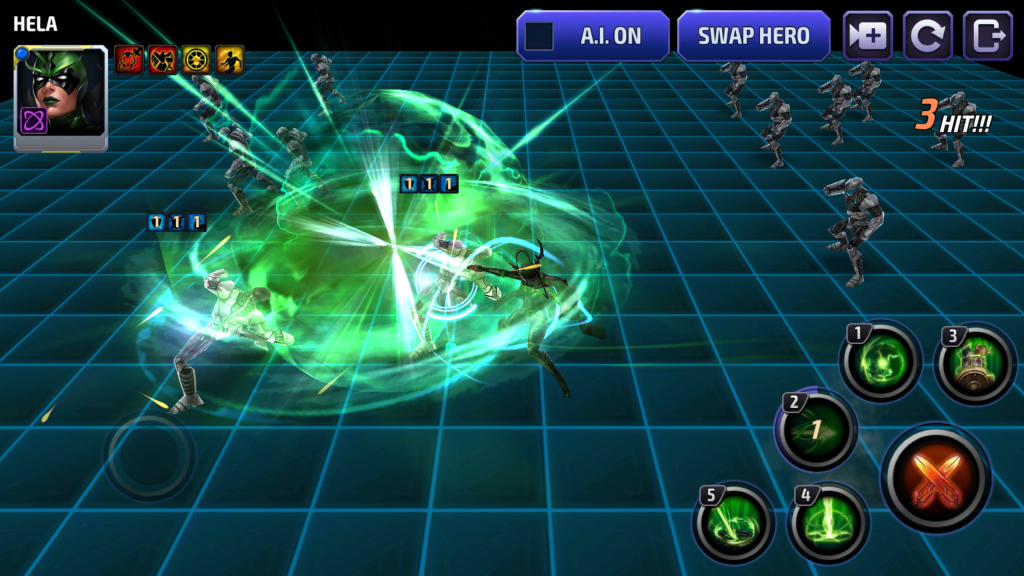 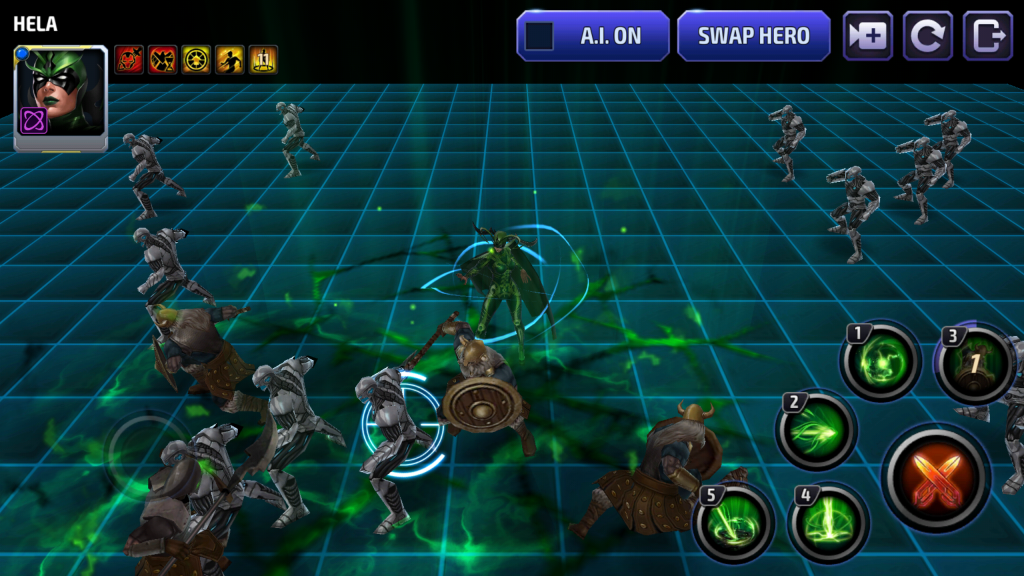 Merciless Queen – Summon an illusion that has 45% of Hela’s stats. Energy attack 129%. 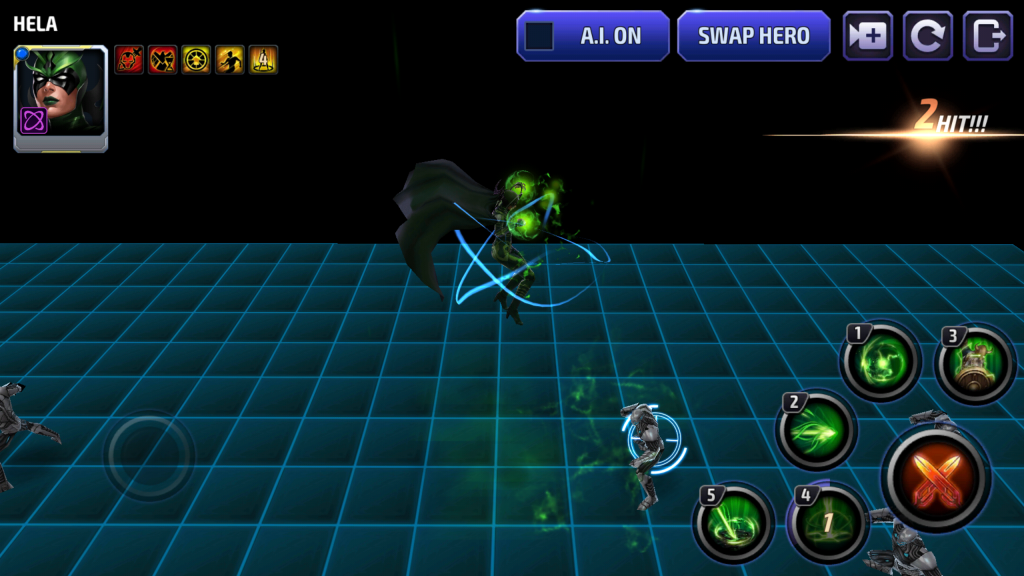 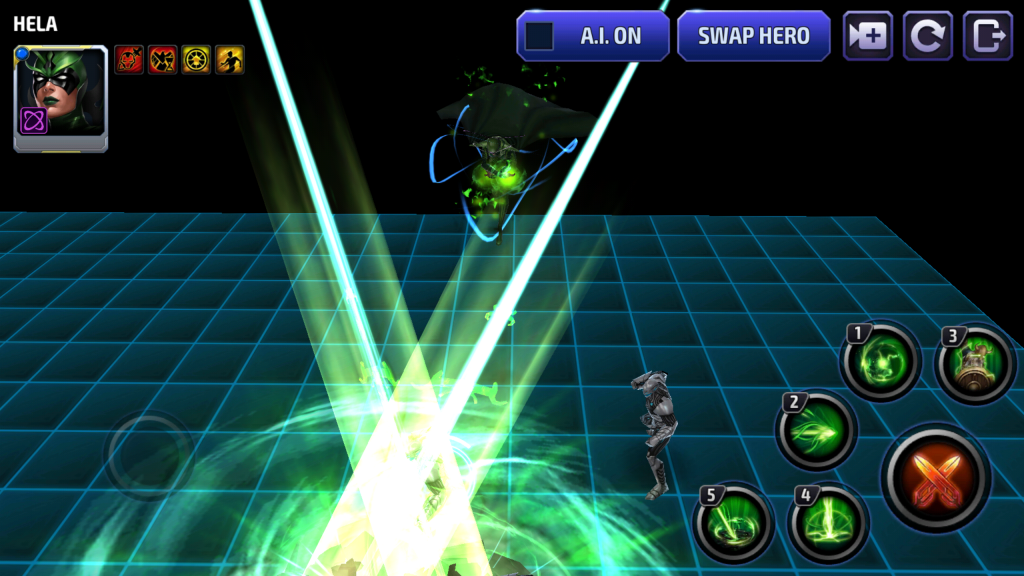 Throne of Niffleheim(Passive) – Apply to self = Guaranteed dodge +25% Increase. Increases all debuff effects by 25%

Gathering of the Dead(Leadership) – Apply to all team members = Energy attack +7.5% ↑ 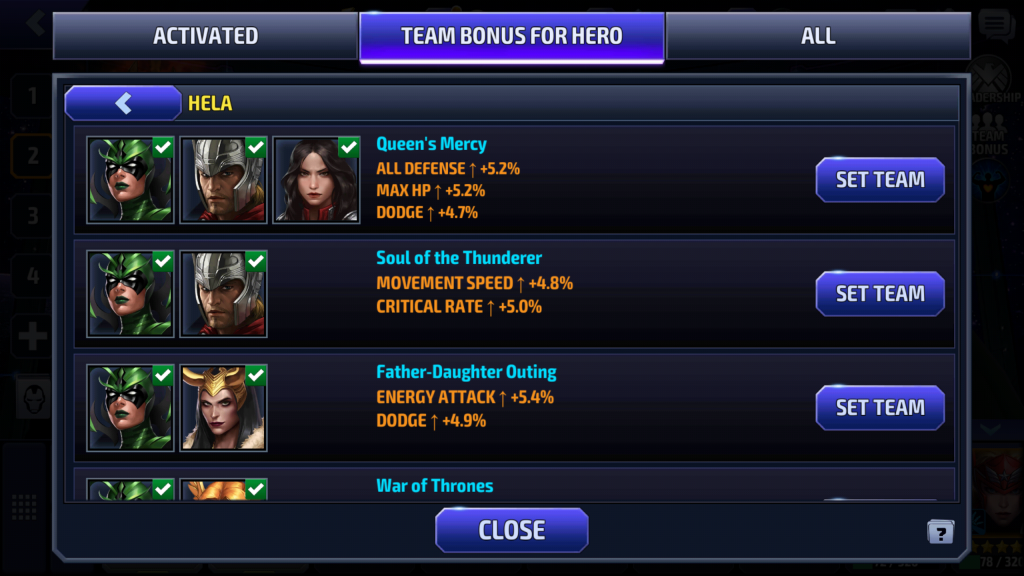 Now here is where we go over Hela’s usefulness in the game. Being a Universal and energy based character gives her a lot of places to be used efficiently.

On a team she’s best placed in either of the side slots but if you run an energy based team she’s great as Leader.

Being a range its best to put her on a team with close combat characters just to have some diversity. Below i’m going to put a list of all Hela’s team combinations and their bonus’s.

Soul of the Thunderer – Hela and Thor

War of Thrones – Hela and Angela

War of the Goddesses – Hela and Enchantress

If you’re going through story mode, Hela is a great hero to have on your team. She’ll make most of the matches easy to go through and if she’d ranked up to at least 5 stars she can probably sweep most of the missions around her level.

Hela is also good to use in Timeline Battles in the Arena. Having her skill for summoning illusions makes Timeline fights much easier than they normally would be.

Her usability in Special’s, Daily, and Villain Siege strongly depends on the team she’s in and her level. With a maxed out Hela doing the three modes are rather simple, Villain Siege can still be a pain but she can handle it well enough even with a bland team build.

Once maxed out and fully enhanced Hela is also good to have for the world bosses. With her good HP and useful skills she is a great addition to higher level mechanics.

So all and all Hela is a great use for story mode and PvP. There’s no shortage of helpful situations she can be put into.

Hela is an over all great Universal character. Her range being a nice touch and her skills being extremely helpful.

My best advice on Hela is focusing your time in increasing her rank and gear level. Having her maxed out quickly will give you a good attacker and someone who can carry a team while you work on other characters.

And if you’re gonna main her fully max her out and let her lead a team to take on some of the World Bosses. Put in the right team combination Hela can tag in with some other energy characters for some major damage.

Overall I’d say Hela is a solid 8 out of 10. Hope you all enjoy playing her as much as I have. 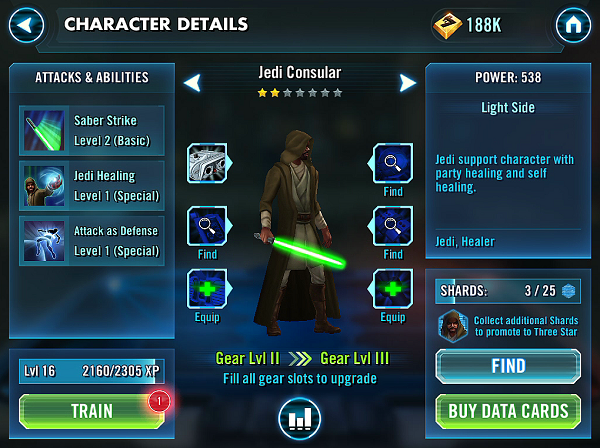